I try to preproc 3T fmri task data to do task connectivity analyses. I intend to use fmriprep to preproc the data. There are some optional preproc options I could use, but I am not yet familiar whether they are good practices. Anyone with experience in regards?

Thanks very much in advance for any input!

This is highly dependent on what kind of connectivity analysis you are doing, as well as your subject cohort. This paper and those cited within should help you decide.

I would say, based on the paper, that ACompCor+some head motion parameters+Framewise Displacement censoring should be good, especially if you have enough subjects and long acquisitions ( so you can spare losing some temporal degrees of freedom).

In regards to the second point, smoothing and denoising should be the only steps you need to apply to your images after fMRIPrep before beginning your 1st level analyses.

Thank you a lot Steven.

1)Temporal high pass filtering is another step I have to implement (I have seen that this is typically done in fmri preproc); it seems to me that fmriprep does not implement that already. Is this right?

-e.g. in a previous project preproc (matlab) I was running fslmaths for that:

In this post, Confounds from fmriprep: which one would you use for GLM?
I see this point: (no mention for ica_aroma here).

Opinions on this topic are divided and this is why FMRIPREP provides those regressors instead of cleaning up the data for you. I personally would include 6 motion parameters, FD, and aCompCor on run level and mean FD on group level (for both task and rest).

Thank you so much again.

There isn’t a good guideline about how long scans should be, also because the number of components that explains 50% variance is different across individuals. If in doubt, just use top 10.

I would suggest not using both, because a pipeline like that hasn’t been benchmarked, as far as I’m aware.

XCP_ABCD (XCP-ABCD: A Robust Postprocessing Pipeline of fMRI data — xcp_abcd version documentation) can take care of your filtering and denoising needs, employing prebuilt pipelines based on those used in the literature. Takes the guesswork out of it

Thank you so much again Steven.

In continuation of our discussion, I found this post

Yes. Inclusion of the cosine filters in the denoising is a high-pass filter.

where if I understand correctly, the developers state that by including the cosine columns from the confound.tsv file to the 1st level GLM high-pass filtering is applied (thus I conclude we do not need to apply separately high-pass filtering to the BOLD data by using another tool (e.g. afni, spm etc)).

Do you understand the same?

You can either filter your data before the design matrix (apply a high- or band-pass filter to all signals, and then pass that filtered signal into the GLM) or include (as suggested above) the cosine filters in the GLM, which will act as a high-pass filter.

You can read more about the cosine regressors here: Outputs of fMRIPrep — fmriprep version documentation 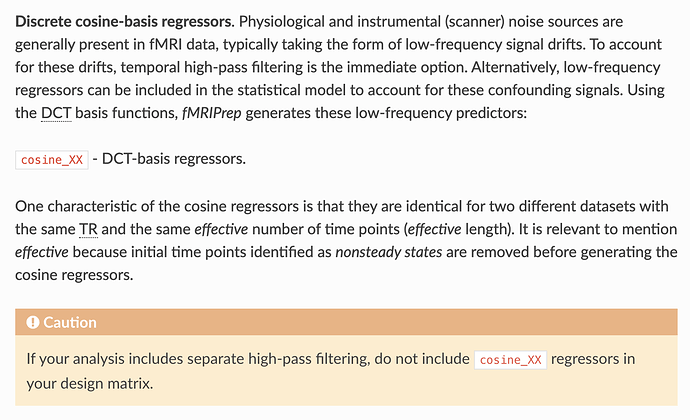 @Steven
Thank you so much again for all your input. It has been valuable.

I made some reading & decided to try the 24P + acompcor, via using the xcp_abcd as you suggested me

However, I get this error:

My goal is to use both acompocor+24P. Did I get right that it should be as follow?

For now I omit this, since I already get an error with the simpler form (using only acompcor).

I tried using 24P (only, or both 24P+acompcor) as well as omitting the “participant”, or placing it in {} {participant}, but nothing has worked so far.

Thank you in advance,

I think only one pipeline can be used at a time. Also see https://github.com/PennLINC/xcp_abcd/issues/267