It’s not common for this to happen with neural data, because biological data in general is fairly well-connected and also noisy, and the noise results in connected neighbors. If you do find that this is a problem, you can probably compensate by increasing the neighborhood size, which is a good idea anyway, so you can give the manifold embedding more context.

Good question. There is a trade-off:

In tutorial 3 exercise 3 we are adding the whole X_mean vector to X_reconstructed. Shouldn’t we add only the K relevant columns of X_mean vector? As due to the truncating of the X matrix, we don’t need to add the means of columns which we have truncated?

This is a great question. The main answer is that when X is reconstructed it should have the same number of columns as it did initially. Imagine the MNIST dataset which is a set of 28 x 28 pixels and 70000 photos. We don’t want the reconstruction to suddenly have fewer pixels! Just that some of the extraneous variance in the pixels be removed. So if we started with 70000 pictures by 28*28 = 784 pixels.

The cropped eigenvectors now translate those 100 components back to the original 784 pixels therefore removing the variance that was attributed by the discarded 684 components. And (to finally answer your question) this means we have to add the X_mean vector, in its entirety, back to the reconstruction. Because all pixels remains in tact.

So if i’m getting it right, eventually in the reconstructed matrix the 684 truncated features columns would simply be composed by the mean of each of these columns for every row?

You’re right that 684 components have been truncated in the projected space. In feature (or pixel) space, those 684 components explained variance in all of the pixels. You reduce variance across all pixels but you don’t zero out any particular pixels. Let’s go back to the picture: 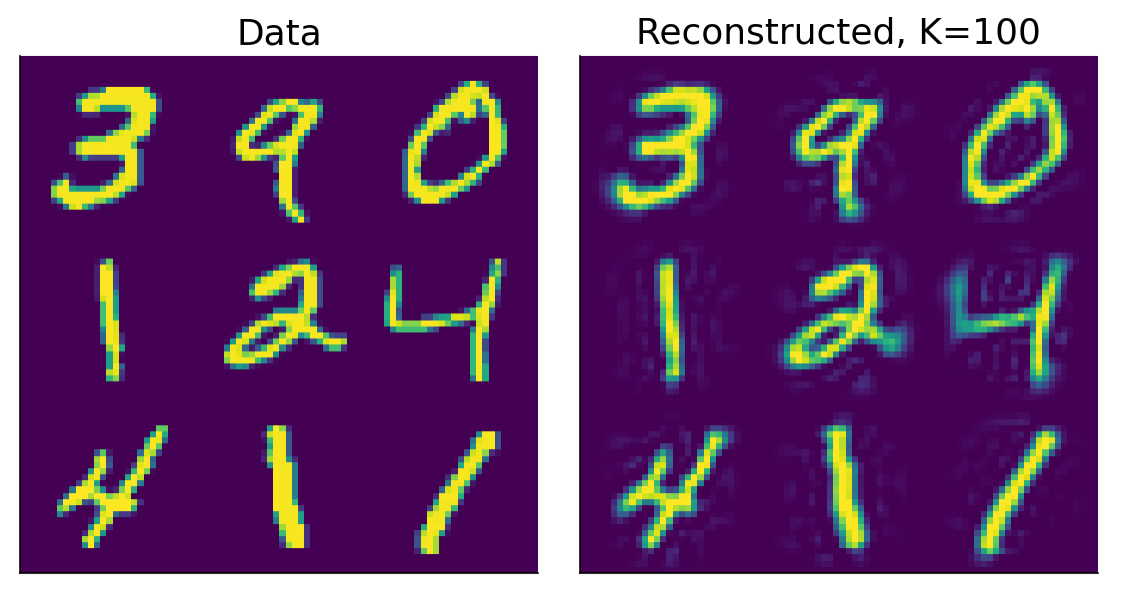 Each pixel in the image is a feature here. The way you have described it, 684 individual pixels (85% of all pixels) would be dead (like on a broken monitor). But this is not what has happened. There is still some variance in all (most?) pixels (… not sure about the edges) but the variance per pixel has been reduced by removing these 684 components.

All features remain and are unlikely to be (or at least, not necessarily) zeroed out entirely by PCA dimensionality reduction.

I think it is a confusion between projected space and feature space. You start with your pixels in “feature” or “pixel” space. Each column is a pixel. Then you run PCA and your data is projected into a new set of basis vectors. This is now in “projected”/“component” space. Now your columns are each a component in projected space. Each column is NOT a pixel after the projection. It is a “component” which is organized along the directions of greatest variance.

You can “remove” these components by zeroing them out exactly as you say. But again these are components and not pixels. You can than project your data back into pixel or feature space. Now each column is again a pixel. And there should be data in each pixel. The effect of removing components (back when we were in projected space) was to reduce the variance in each pixel but it doesn’t explicitly zero-out any pixels at all.

So we zeroed the variance in 684 features as they are in the PCA components space, which are not original pixels but compositions of original pixels. Then we reconstruct the “surviving” features back to the original dimensions where they represent the pixels and we add each pixel its original mean.

BOOM! Exactly. That’s a better explanation. Thanks for that