A strange bug with a huge colorbar

I have a statmap exported from SPM, and I am trying to visualise it with nilearn using plot_stat_map or glass brain. Both plots show a weirdly inflated colorbar. Changing vmax changes the colored part of the colorbar, but the bug persists.
Interesting twists:

Did anyone encounter such a problem? And, more importantly, is there a way to fix this? 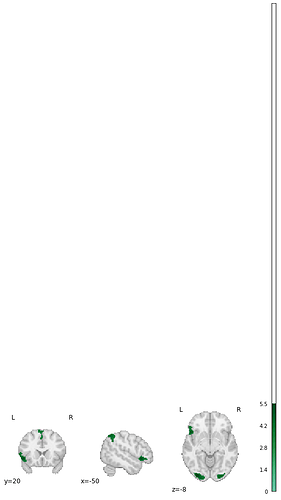 Can you share the version of nilearn and of matplotlib you’re using for both your 3.7 and 3.10 environments ? And can you confirm that you’re colleague is also plotting using nilearn ? I assume as much from the fact that you sent him your code, but just to be explicit !

Thank you for your answer Elizabeth @emdupre .
I am using nilearn version 0.9.0 and matplotlib v. 3.5.1 on both systems. Yes, my colleague is using the same exact code. His setup is nilearn v. 0.9 and matplotlib version 4.3.4. Here’s a snippet of two approaches we tried:

both have the same issue on my systems.
I tried exporting the images directly to files and the issue is somewhat better, but not solved completely, here’s an image of a different stat map on a glass brain

As you can see, the exported image has the bar cut off at the image border, but it’s still not perfect.

Any ideas how to fix that would be appreciated

Thanks for confirming and sharing this additional information !

It seems like the immediate fix is to upgrade your matplotlib version to a more recent release. Could you please try that and let us know if it resolves the issue ?

Even if it does: 3.5.1 is a supported matplotlib release for Nilearn, so I wouldn’t expect this behavior. Once we confirm that it’s tied to this older MPL release, we can hopefully address it directly in the Nilearn codebase !

Dear Elizabeth @emdupre,
It seems that 3.5.1 is the latest release of matplotlib? Anyway, I downgraded to a version my colleague uses (3.4.3) and the colorbar behaves properly now, thanks for the solution!

Sorry, I looked too quickly and thought you had said that your colleague had a newer MPL version ! You’re correct that 3.5.1 is the newest release.

I’ll open an issue on the Nilearn github and crosslink this NeuroStars post so we can confirm that we’re supporting the newest MPL release. Thanks for reporting this !

Here’s the GitHub issue, in case you’d like to chime-in there : https://github.com/nilearn/nilearn/issues/3183

Indeed it is a nilearn bug due to a change in matplotlib (see details in the issue linked by @emdupre ). In the meanwhile you can downgrade matplotlib or use nilearn.plot_stat_map(..., symmetric_cmap=True)