I’m trying to use fmriPrep and I’m running into a BIDs issue. I’ve attached a picture, basically it’s telling me to store my “Repetition Time” along with “Task Name” in a file “/bold.json” but then it’s telling me that said file is not named properly. Is there something I’m missing? 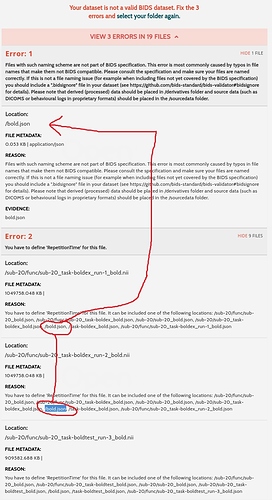 I’d need to know a little more about your dataset, but one idea is that you might have multiple tasks defined. If indeed that is the case, you need different JSON metadata for each task, so it’s better to specify which _bold.nii.gz files you’re referring to by adding a task key-value pair. Does renaming the file to

Indeed - task is compulsory and the validator gives a wrong hint: https://github.com/bids-standard/bids-validator/issues/680

Okay, I assumed that if all BOLD scans used the same parameters I’d be okay to just have an umbrella “bold.json” with ‘Task Name = Bold’… Apparently not

I’ve included everything I can in this pic… The errors are telling me-
Error 1: Repetition time not defined for any of my bold scans

Error 2: ‘task-boldtest_bold.json’ isn’t valid, Reason: A leading decimal point can be confused with a dot

Error 3: TaskName not defined for any of my bold scans

I don’t understand why only ‘task-boldtest_bold.json’ was flagged since I literally copied the json file 3 times and changed the task name between them.

Thanks again for the help!!! 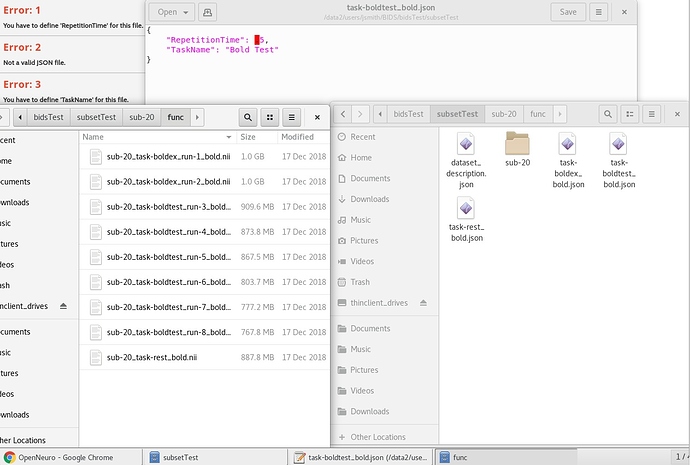 It might’ve been as simple as putting quotes around the .5 for repetition time… Validator is taking a long time to run opposed to instantly spitting out error messages.

Yes, you need to have a valid file or else all fields following the error are not interpreted !

If you look in section 4.3 Key/value files of the specification there’s no need for quotes, so if you start the TR value with an integer (so 0.5 instead of .5) you should (hopefully) be compliant. Let us know how it goes !

It seems like it worked… It’s now telling me my Repetition Time doesn’t match the NIFTI header… I’m a new grad student and new to MRI so I guess my next step is figuring out how to read NIFTI headers (haha). Thanks for the help!

Thanks for letting us know – Glad that worked !

If you’re looking for some resources to help with getting started, there’s a collection over in the BIDS Starter Kit. It’d also be a great place to get your perspective as a new BIDS user !