I’ve come across instances where for one reason or another an anatomical acquisition is primarily scanned on one axis (axial in the example FLAIR image below).

Would having a reduced FOV anatomical cause issues for BIDS-apps that utilize such acquisitions, such as during the Freesurfer recon-all portion of fMRIPrep? My hunch has been to not convert these reduced FOV anatomicals to BIDS at all, for fear that they’ll lead to problems further along, but wanted to clarify.

Hi @dlevitas, I don’t know about BIDS-apps part of your question but this image looks like a whole-brain image with highly anisotropic voxels. A nifti viewer which can render voxel dimensions with the right aspect ratio would show that this image is not reduced FOV. Here I have downloaded and stretched your coronal slice to illustrate my point: 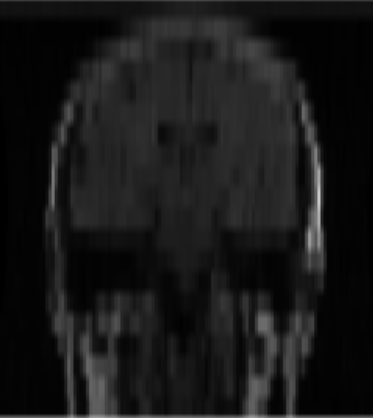 Hope this is helpful in some way.

@ofgulban thanks for pointing this out! Yes, after loading the nifti file into nibabel, I can now see that the shape indicates that it is anisotropic (256, 256, 35)

It might be more informative to check the voxel dimensions, because the image matrix can have unequal dimension lengths but have isotropic voxels (aka partial coverage or reduced FOV images). Alternative to nibabel, you can use fslinfo or fslhd commands (from FSL) to check the nifti header for voxel dimension info.