Using fmriprep for my first PhD scanning project, and I’m curious what people think about this.
When I just use the standard 6 motion nuisance regressors, I get a large MCC & visual response for task > baseline, but weak baseline > task, even at the very liberal threshold shown here (showing 2nd level, but similar in individuals. n=9, 45 min of task data).

Any idea why these would trade off like this?

I’m doing what I think is a pretty standard SPM12 analysis (modelling runs separately; 6mm smoothing; masking with fmriprep’s brain mask; 128s HPF instead of cosine regressors, but including them looks pretty similar). It’s a pretty fast design (3-5 sec ITI, 1.2 sec TR, multiband-4), so there’s not a ton of baseline. Not doing anything interesting in the preproc, except --use-syn-sdc (still need to add the IntendedFor to my fieldmaps). 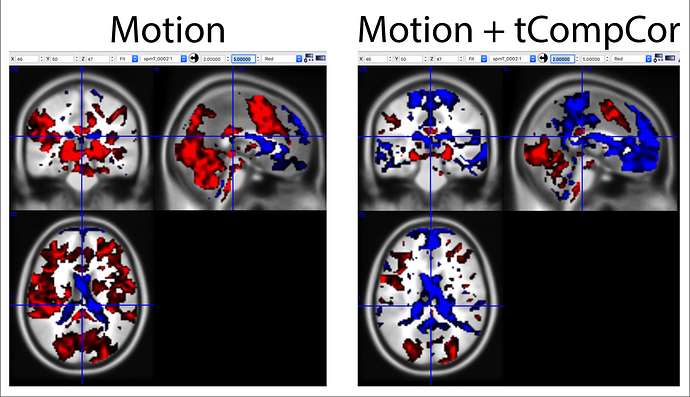