Differences between FMRIPREP runs on same data. What causes them?

If we run FMRIPREP twice on the same data, we get different results. That’s well known, and such variability can be avoided with the use of options such as --random-seed 0, --skull-strip-fixed-seed, --nthreads 1, and --omp-nthreads 1.

However, there is no obvious way to choose one seed over another in --random-seed, and for the analyses we are running, the choice of the seed causes relevant, non-ignorable differences in the final results.

Before we establish a procedure that will run FMRIPREP many times to cancel out such variability, we’d like to understand what causes it. We thought ANTs could be the culprit but we also observe temporal variability in the *_desc-preproc_bold.nii.gz, which rules ANTs out since registration would affect all volumes equally. We also thought of ICA-AROMA but the latter should (so we understand) not affect the *_desc-preproc_bold.nii.gz files, just produce covariates in the *_desc-confounds_timeseries.tsv file.

The screenshot below shows the maps of the correlations of the time series of pairs of runs of FMRIPREP. That is, for every voxel from *_desc-preproc_bold.nii.gz file, we correlate the time series of that voxel with the homologous voxel in the *_desc-preproc_bold.nii.gz from a different run of FMRIPREP (that presumably used a different random seed). Note that the variability isn’t random, having some spatial pattern. Note also that it isn’t negligible. While we’ve set the colorbar between 0.95 and 1, we have correlations here as low as 0.27 in some places – and have seen them even negative!

What could be causing this? 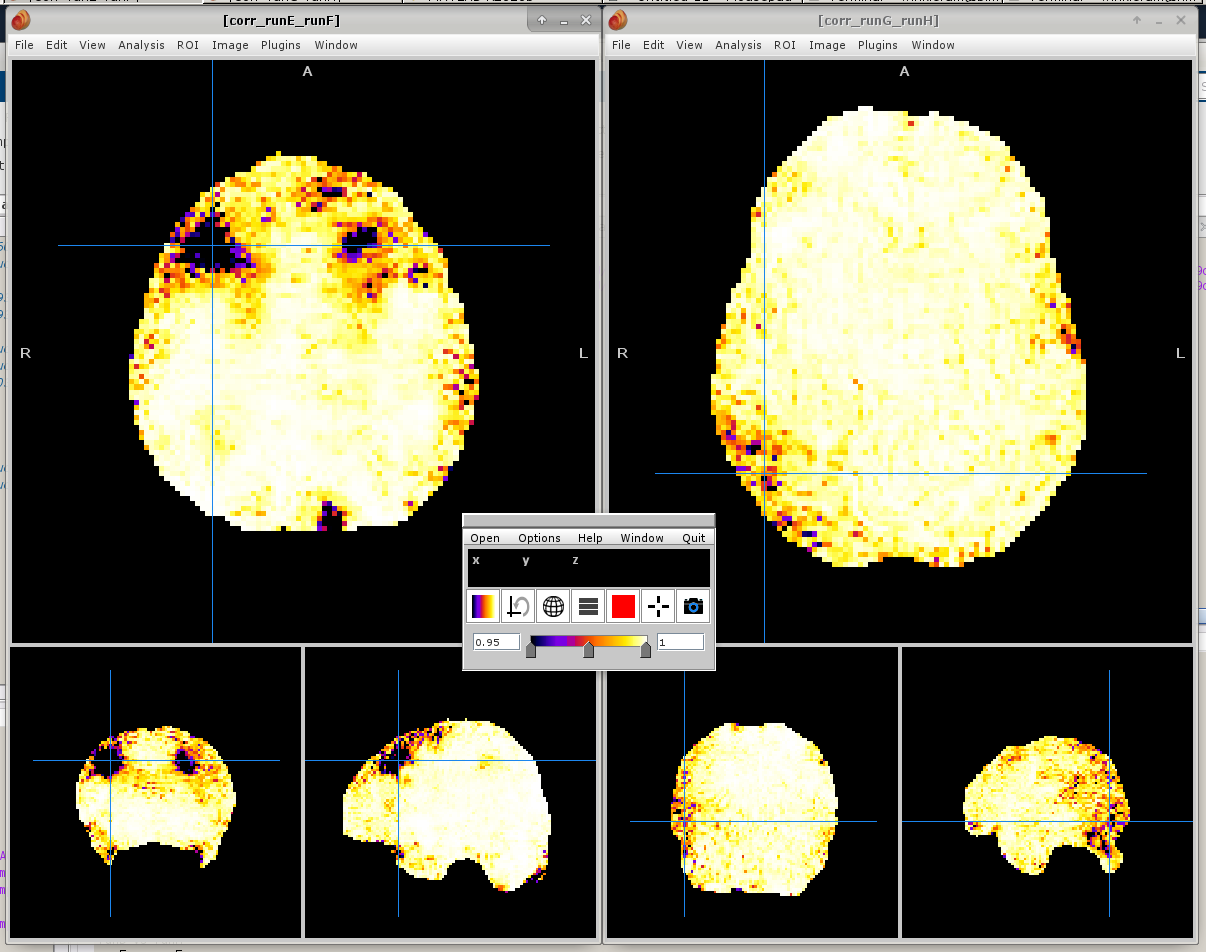 Just fyi, the calls to FMRIPREP were (the run names are in the headers of the windows in the screenshot):

Also, to facilitate finding this in the future, I’m writing here “FMRIPREP is not reproducible”, to help search engines.

However, there is no obvious way to choose one seed over another in --random-seed, and for the analyses we are running, the choice of the seed causes relevant, non-ignorable differences in the final results.

What version of fMRIPrep is this? What is the platform you are running on?

Perhaps @mgxd can correct me, but I believe you can modify and set arbitrary seeds through the config file. This config file is not meant for the user to tweak, but I think in this case could be useful before setting costly experiments, as you were mentioning.

Unfortunately, I can see now this is not documented - but here we added a feature to track seeds (ENH: Keep track and allow reuse of random seeds with the config module by mgxd · Pull Request #2086 · nipreps/fmriprep · GitHub).

As you will find, there’s a way to set the ANTs’ seed, but also other seeds (e.g., for Python’s random number generator).

What could be causing this?

I agree this is puzzling and worrisome.

The most parsimonious answer would be a bug - we might promise to control for the seeds with the command line option and then not honor the promise because we did not catch the error during the quality assessment of related PRs. The bug could affect the whole system or subparts (i.e., only ANTs, only Python, other, etc.).

There’s also the possibility that some pieces of the workflow are not deterministic (although we believed they are).

The screenshot below shows the maps of the correlations of the time series of pairs of runs of FMRIPREP. That is, for every voxel from *_desc-preproc_bold.nii.gz file, we correlate the time series of that voxel with the homologous voxel in the *_desc-preproc_bold.nii.gz from a different run of FMRIPREP (that presumably used a different random seed). Note that the variability isn’t random, having some spatial pattern. Note also that it isn’t negligible. While we’ve set the colorbar between 0.95 and 1, we have correlations here as low as 0.27 in some places – and have seen them even negative!

Would you be able to share scripts or any materials (including data, if you identified some datasets more susceptible to larger undesired variabilities) so that we can replicate this in our settings? Having more eyes on the problem will definitely speed up the resolution.

@pbellec’s team is starting to look into the run-to-run reproducibility of the results, so I would imagine we have to bring this up in our upcoming fMRIPrep roundup. @sgiavasis and Michael Milham’s group have poked fMRIPrep in many ways and also found several issues we should address. I believe they mostly found unreliabilities around CompCor results in the confounds file. In their whole-brain connectivity analysis of repeatability though, fMRIPrep did not qualify badly (actually, Steve can correct me if I say quite good here).

Lastly, I will take some issue with the claim “FMRIPREP is not reproducible” and hope everyone rather understands that “A version or versions of fMRIPrep has been found not to be run-to-run repeatable to the last bit for (yet) unknown reasons”. Although I agree the latter is also far from ideal, IMHO the reproducibility of scientific results is way much bigger than these variabilities you found (thanks for reporting, otherwise we would not focus our attention on this). This particular problem could range from a sneaky bug to a design flaw. But even in the latter case, the many contributors who have donated their time to the tool, especially in making it thoroughly described with documentation and improvements to the reports deserve that bug/issue reporting is fair and precise. At the very least, something like “fMRIPrep seemingly disrespects seeding parameters and therefore is not reproducible”. Also, the fact that your team reached this far in understanding the tool, the outputs, and the code (honestly, you made a long way) only speaks for the thoroughness of your research and also the transparency with which the fMRIPrep team has worked towards that very much desired reproducibility. I take it was meant to serve as bait to call for our attention and therefore read it without the blanket implications, but, if anything, it just put me off for a while (and I would guess some other potential respondents have felt similarly).

That said, I wish we had the financial muscle to support users and the tool immediately as questions arise. But we don’t have it for the time being, and all users of fMRIPrep and MRIQC are experiencing large latencies in receiving responses from any person related to the tools. This is an issue that we probably want to address in our meet-up.

I agree that this particular issue with repeatability is very important and we will try to set up the necessary resources as soon as possible to investigate it. We anticipatedly want to thank you for taking the time to report it and will appreciate very much any help as requested above with code or follow-ups about your experiences.

a couple of quick comments.

@oesteban as far as I understand the post, the variations arise when the random seeding is not controlled. These variations are, as Anderson said, expected. I am still not sure whether even with controlled seeds fmriprep is entirely reproducible, but I don’t think that’s what this is about.

@oesteban another thought, at least in some parts of the brain, the variations are fairly large. Ideally this would be reduced or even suppressed, but I am pretty sure this would happen with any fmri processing pipeline (with random seeding) atm, not an fmriprep issue per say.

@anderson My guess is that registration and distortion correction can lead to large change In a voxel signal. But that’s just a guess. As Oscar mentioned, @ltetrel myself and @glatard 's team have started quantifying systematically propagation of numerical noise across fmriprep runs. At the moment our objective is not to identify which part of the pipeline are causing instabilities, but rather to quantify how big one can expect it to be (just like you did). The objective is to offer users a way to test that their particular installation of fmriprep does produce expected results (with numerical rounding errors creeping in computations across OS / OS versions, even in a container).

Tracking down and reducing sources of variability is certainly of interest but not immediately on our radar - although likely to be soon. Happy to discuss the topic on the next fmriprep round up call, and curious to hear more about the results of your investigation.