Does only the time-series data of fMRI matter or does spatial distribution of the signal values also matter?

I was denoising fMRI data using GLM and had a question regarding the “data” of fMRI in general.

Below is a time series of the before/after GLM for a given voxel: 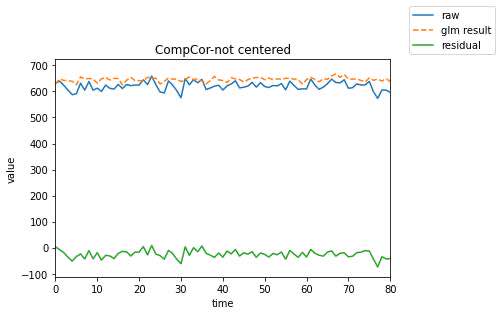 As you can see, the raw values (actually we went through a preprocessing step prior to GLM denoising) had a value of around 600\pm 50, while the residual (i.e. denoised data) had a value around 0\pm 50. In other words, it seems that via GLM, the raw data was somewhat “centered”. At first I thought this was OK, as I thought that only the fluctuations of the data matter (i.e. I had this assumption that mean centering doesn’t remove any information in the data). However, I realized that when we did this, the spatial distribution of signal values before and after GLM changes, as the pictures below show (the picture below is the distribution of fMRI signal for a given time point before and after GLM denoising) (the pictures will be added as a comment as apparently new users can’t embed more than one image):