I am using the ds008 dataset from OpenfMRI.org as an example for some training. One of the tasks is to compare the NIfTI header information from the images to the information published.

From the published article cited at Openfmri.org,

The ability to stop motor responses depends critically on the right inferior frontal cortex (IFC) and also engages a midbrain region consistent with the subthalamic nucleus (STN). Here we used diffusion-weighted imaging (DWI) tractography to show that the IFC and the STN region are connected via a white matter tract, which could underlie a "hyperdirect" pathway for basal ganglia control. Using a novel method of "triangulation" analysis of tractography data, we also found that both the IFC and the STN region are connected with the presupplementary motor area (preSMA). We hypothesized that the preSMA could play a conflict detection/resolution role within a network between the preSMA, the IFC, and the STN region. A second experiment tested this idea with functional magnetic resonance imaging (fMRI) using a conditional stop-signal paradigm, enabling examination of behavioral and neural signatures of conflict-induced slowing. The preSMA, IFC, and STN region were significantly activated the greater the conflict-induced slowing. Activation corresponded strongly with spatial foci predicted by the DWI tract analysis, as well as with foci activated by complete response inhibition. The results illustrate how tractography can reveal connections that are verifiable with fMRI. The results also demonstrate a three-way functional-anatomical network in the right hemisphere that could either brake or completely stop responses.

Similarly, they report for the T2 MP-RAGE images

I would anticipate from that the first and second dims would be 192 and the third 160, but the image header contains

When I run fslinfo on the T1 weighted image, I get

Am I missing something really obvious that would be apparent to an experienced analyst?

The MP-RAGE acqusition describes T1w not T2w scans. Nonetheless, it seems that the paper described the most common data acquisition parameters, but subjects 1,2,3,5,7,9 were scanned with different T1w parameters and subjects 10-15 were scanned with different BOLD/EPI parameters. Those differences should probably be modeled on the group level (as categorical variables) in future reanalyses.

On the brighter side the BIDS Validator so we hope that in the future we will see fewer such errors and/or better data descriptions. 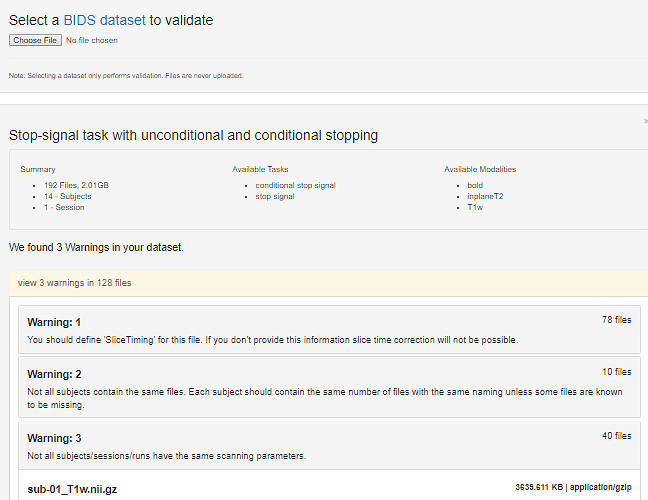 This is mostly likely an error in the methods section of the paper. Unfortunately it’s hard to be sure at this point.