Thanks for your help in advance!
I have some single-band fMRI data and a corresponding field map (in Hz) generated directly from a GE scanner, below please see the folder structure.

One example of the scanner-generated field map. 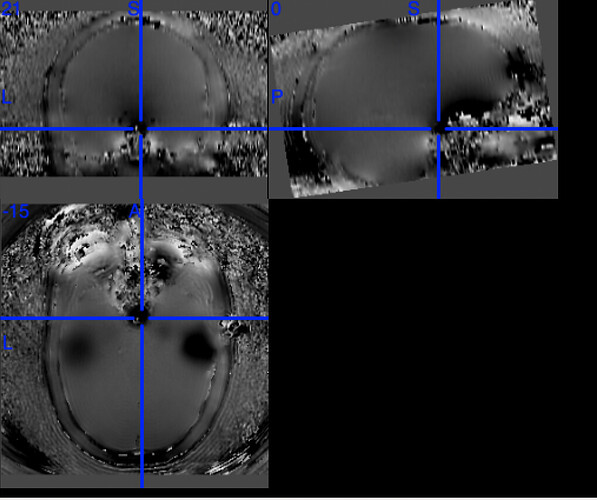 According to the summary report, fMRIprep used FMB (fieldmap-based) - directly measured B0 map in the SDC. Somehow the images after susceptibility distortion correction (SDC) in fMRIPrep 20.2.3 were even worse - more distortion, especially in the medial frontal area and the brainstem (see below). Sorry, it’s less obvious than a gif.

I checked the phase encoding direction of the fMRI data and it was correctly written in the .json sidecar - here it’s AP, our Nifti files (the functional data and the field map) are in LAS orientation, so PhaseEncodingDirection = j-.

I wonder,
(1) if the field map should be somehow multiplied by -1 (flipped its sign) to be entered into fmriprep - I tried to do so and the corrected images looks the same as flipping the PE direction.
(2) if fMRIprep reorients functional images during/before SDC correction, but does not change the PhaseEncodingDirection.

Any suggestion will be appreciated!

In my opinion, the correct answer may be:

(1) if the field map should be somehow multiplied by -1 (flipped its sign) to be entered into fmriprep - I tried to do so and the corrected images looks the same as flipping the PE direction.

Indeed, here is how a fieldmap (in Hz, grayscale colormap) looks on our dataset:

As you can see, in the temporal cavities and in the frontal sinuses, the intensity in high (white color) , which represent a positive offset of the B0 shift. In your fieldmap, the colors seems reversed.
This fieldmap I show is generated by FSL-topup from on a pair AP-PA phase reserved SE-EPI images used to correct our functional images.

Which scanner do you use to generate the fieldmap you show?

Thanks for your reply and the example of your fieldmap.

I had the same suspicion, and luckily we also collected a pair of AP-PA phase reversed SE-EPI images in the same session for some other multiband fMRI data, so I also generated a fieldmap from this pair to compare with the direct B0, however it looked like my above fieldmap. 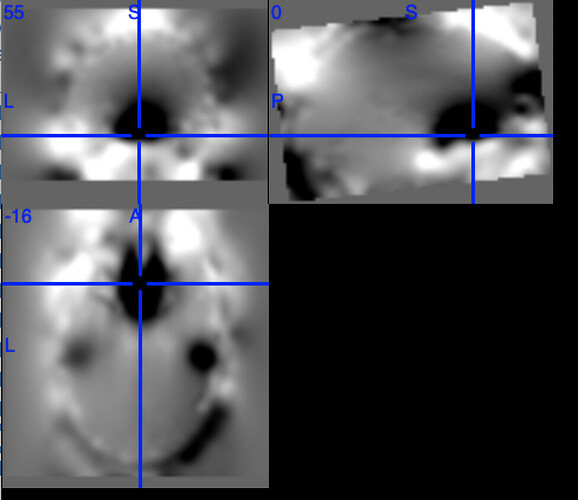 More interestingly the fMRIPrep SDC corrected images look correct for these multiband fMRI data using this pair of AP-PA phase reversed SE-EPI images. So I decided to open this thread to ask help. I feel it’s something related to the different process of direct B0 SDC and the PEB/PEPOLAR SDC.

Our data were collected on a GE scanner, the direct B0 fieldmap was generated by a research spiral sequence.

This is interesting!
I guess you entered the correct phase encoding directions in the acquisition_parameters.txt file for topup?
If you look at the topup user page, the fieldmap shown there has also higher intensity in the frontal sinuses and temporal lobes:
https://fsl.fmrib.ox.ac.uk/fsl/fslwiki/topup/TopupUsersGuide

Thank you for your reply again! You are right, the values I put into the acquisition_parameters.txt were incorrect because the example AP-PA phase reversed SE-EPI images I used were in LPS instead of LAS orientation. After changing the orientation to LAS - just to match the direct B0 and to avoid any confounding effect, I did the following: 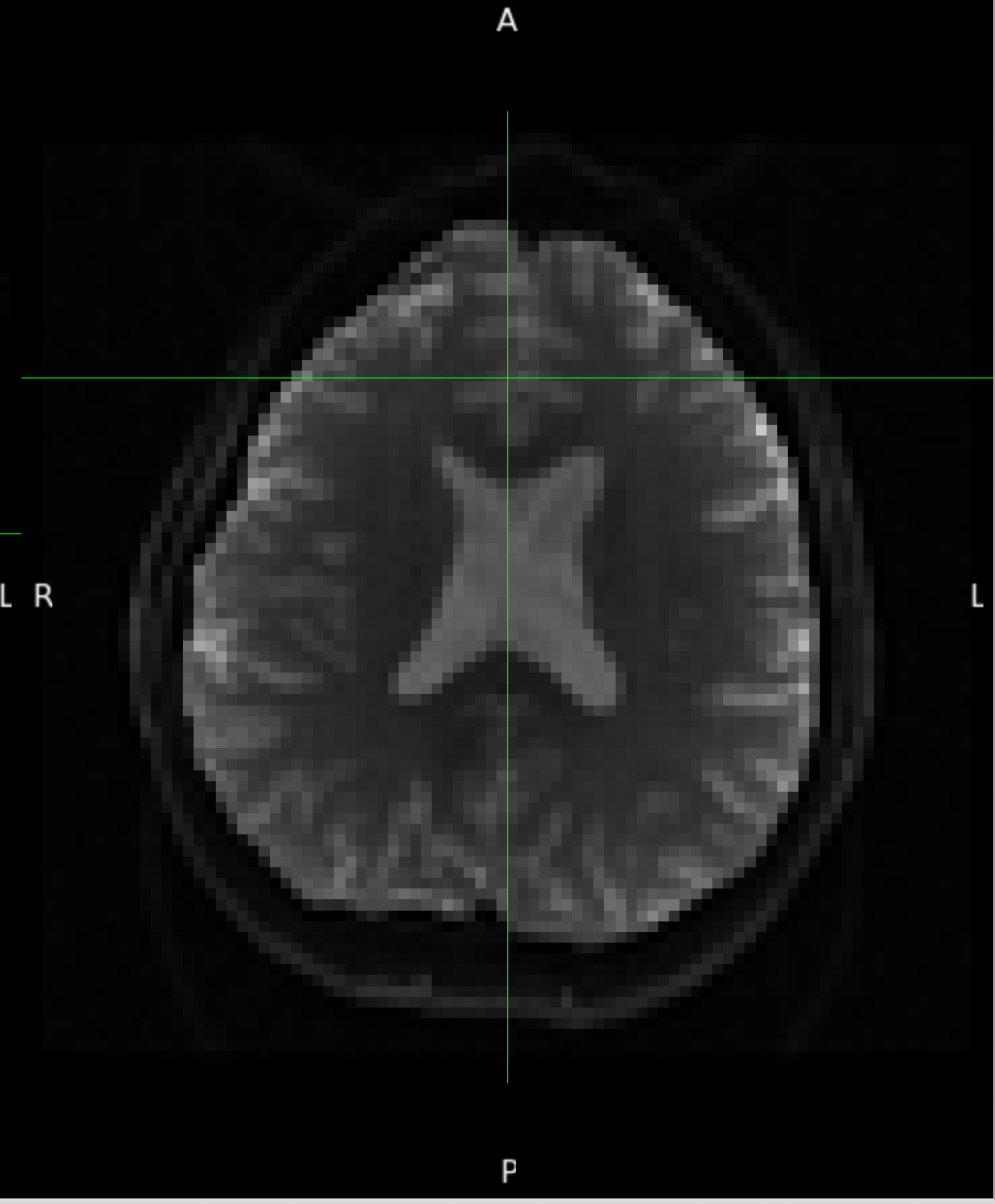 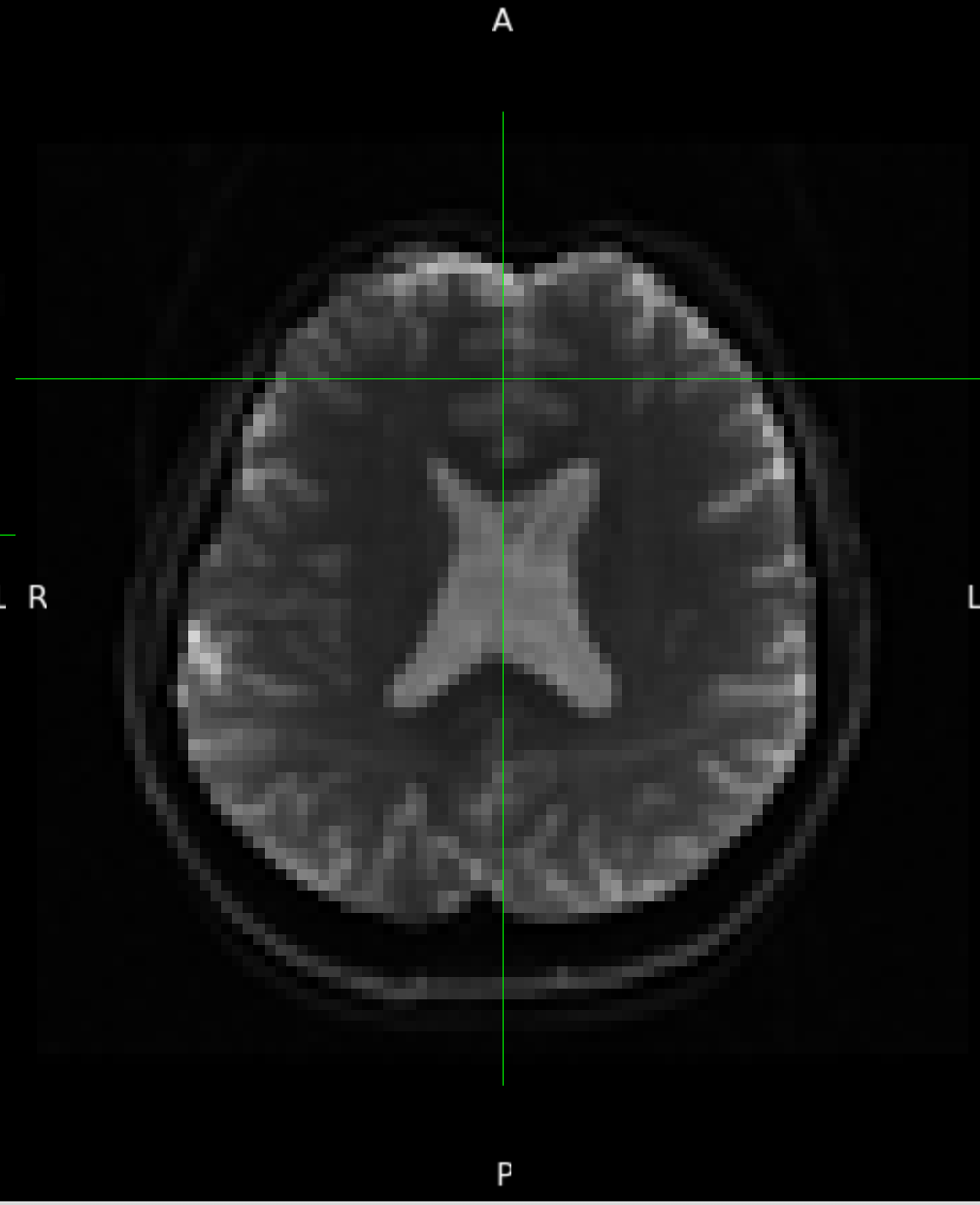 [2] generate acquisition_parameters.txt. Because here the image orientation is LAS, so PA should be 0 1 0 in the first three columns while AP should be 0 -1 0.

The generated fieldmap does look similar to your fieldmap and the one on the topup website in terms of the orbital frontal and temporal lobe. 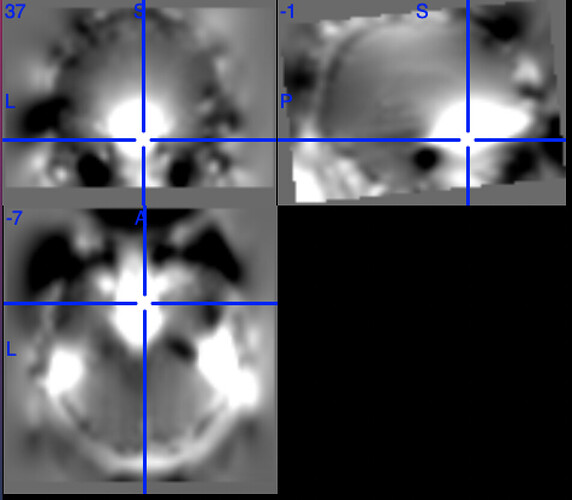 Now I think I understand that I will need to reverse my direct B0 fieldmap to make FSL fugue (and hence fMRIPrep) work. It’s very interesting though why the fieldmap is collected in a reversed way.

Thanks so much for your help!

Thank you for your feedback and I am glad you understood what was going on.

It may be something speak about with your GE application specialist to understand this behavior with the calculated fieldmap by the scanner.

For anyone who uses GE scanner and has such direct B0 fieldmap, and meets this same problem.

Now to solve the problem for all functional images using this spiral map, I just re-orient them into LPS and the results now look correct to me.

Hi you could use fslhd to tell the orientation of your data.
For example, my following data has an LPS orientation.

Re how to change the orientation, I use fslreorient2std or nipype:
from nipype.interfaces.image import Reorient

I hope it helps.