I’m working with my local IT folks to get fmriprep up and running, which is very exciting. There’s an odd behavior, though. When I try to load the module in python there are errors implying modules are missing, but they aren’t. Below is a screen cap of the error I’m getting, but I can run this successfully
from nilearn.masking import compute_epi_mask
and that seems to be the “problem”.

Thanks for any help!
Jeanette 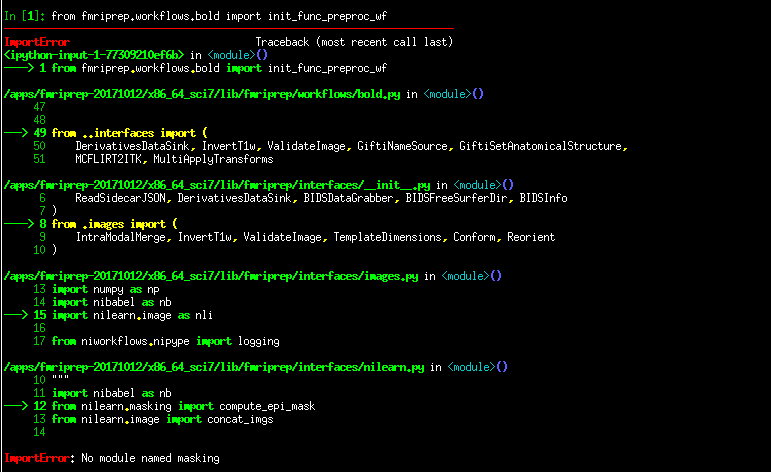 That Python is trying to import nilearn.image by looking in fmriprep.interfaces.nilearn strikes me as odd. At a guess, I’d say you don’t have nilearn installed. Could you check to see that you can import nilearn, and share the version?

I think this import behavior would only occur in Python 2, but I’m not positive of this, so I’ll just note we do not support Python 2; if it works, it’s pretty much by accident, and it will very likely break in the future. If you’re going to have a local installation, we strongly recommend running with Python 3.

Finally, if you’re working with IT, I’m assuming you’re trying to install this on a cluster? Are you able to use Singularity, instead? That’s our recommended approach for running fmriprep on a cluster.

Ah, yes, I’m using python 2 and I’m unsure if python 3 is an option, currently. I missed that this wouldn’t work with python 2.

Singularity is not an option at this time.

Oh well, thanks for the help,
Jeanette