Hi all,
I’m seeing the same issue in quite a few of my fmriprep (1.1.8) reports, where the BBR looks like it ran into trouble: 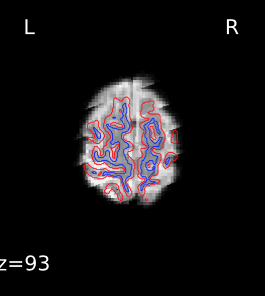 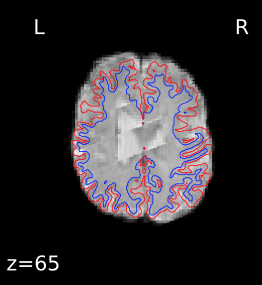 Registration does look okay if I use --fs-no-reconall for the affected participants, at least the ones I’ve done so far. Example .svg files and report here: https://www.dropbox.com/sh/5q20redzlltxm9j/AABRXhWUBxBHxWJJPLcZaSEfa?dl=0)

Is this an issue with the visualization only, or does it indicate an actual issue with the registration? It’s interesting that for the affected participants, I see the same problem in the same areas and in approximately the same slices. It doesn’t seem to be particularly related to how much movement there is in the BOLD series. I also don’t see a clear pattern of affected subjects being outliers or extreme values on the MRIQC group report metrics. Some of the affected people do have lower CNR in their structural images, but at least one person has fairly high CNR (relative to the group). The input images don’t appear to be especially distorted.

Any ideas what might be causing this, and/or recommendations to address? (I’d like to continue using Freesurfer BBR because it was working much better for a lot of these older adult brains with structural differences from the T1 template that FLIRT was having trouble coping with. Unless it’s okay to use Freesurfer for some and not for others, depending on which yields the best registration – but that seems a bit suspect to me, to use different pipelines within the same dataset.)

Thanks for any insight you can offer!

Further investigation…
I looked at the EPI-T1 registration using SPM12 Check Reg, and it actually looks okay; the two images line up well. My hypothesis is that what I’m seeing in the reports may have something to do with the fact that the Freesurfer surface recon yields these big gaps at the midline of the T1w image for a number of my participants, e.g.,

I haven’t systematically checked every single participant, but the ones I looked at which are unaffected by the issue in their reports look more like this:

I suspect what may be causing this is the fact that many in my sample have noticeable age-related grey matter atrophy, which is often visible particularly as increased intrahemispheric space in the frontal lobe.

So I think I figured out why this is happening…now my question is, are these large “gaps” (where I assume there are empty voxels?) in many of my preprocessed T1w image a problem?

What you see is totally expected and desired (although some additional explanation would be nice to have on the reports).

The reports shows the “artifact” of using Nearest Neighbors to interpolate the result. Although you get those ugly views of the BOLD data, it is useful to understand the effects of the original voxel size and preempts slice-intensity grating to go unnoticed.

Since the final images are resampled using Lanczos interpolation, you should not see this artifact on them (and you don’t, as you confirmed with Check Reg).

Ah, thanks so much @oesteban! Good to know.

Sure, happy to do that. I’ll follow up on github.