I have used Freesurfer’s mri_vol2surf to create surface maps of volumetric auditory activation data. However, my input nii volume is a mask of the PAC which contains values between 1-11 (labelling which tone frequency the voxel correlated with most strongly). In the projection from volume to surface, the non-mask 0s are also influencing the surroundings of my ROI such that the outer edges will inevitably contain lowest values independent of the actual labeled tone (see the red surroundings in the image).

I tried to look up whether it would be possible to set some kind of threshold to mri_vol2surf so that it does not consider the 0s in the projection but could not find anything in the documentation. Is the only alternative to play with the threshold in such a way that the surroundings disappear (which in my case would be a far higher value than a cut-off of 1)? How would you go about creating such a map with definite values per voxel without “washing out” the information in the surroundings? 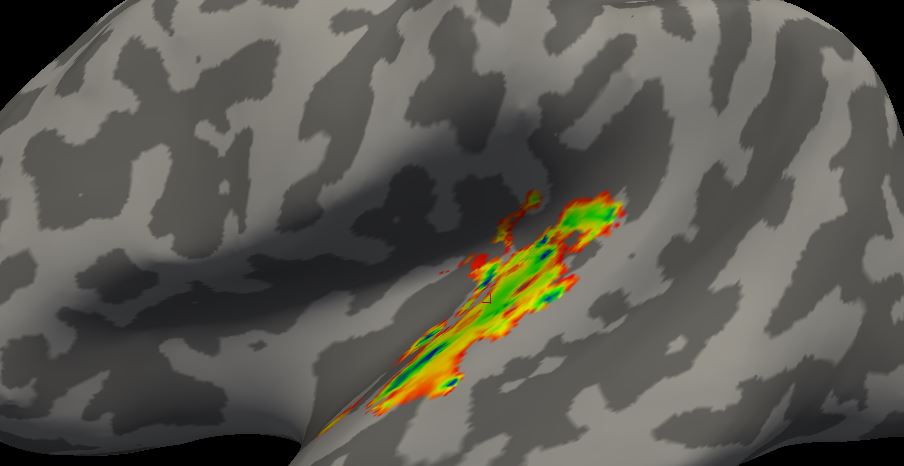 Any help will be much appreciated!

if the interpolation method from mri_vol2surf is set to --interp nearest, which I suppose is the default, then your projected surfaces will not by influenced by the 0s.

However, it may be that when visually plotting them of an inflated surface, as in the image you show, the plotting algorithm interpolates the values automatically, leading to the misleading “0s” effect that you see.
The way to create a visualize a map without this effect is to use a plotting tool that allows you to change the display interpolation algorithm to nearest neighbors. I’m not sure this functionality is implemented in FreeView, but if so I’m not aware of it.