I am trying to transform 8-beckmann-ica probability maps onto my individual subjects. FSL dual_regression seems already what I need to run:

I tried this command on 3 subjects’ preprocessed and atlas projected resting-state data:

But, the output z-maps seem super strange: Areas outside of brain have values, which should not be the case. 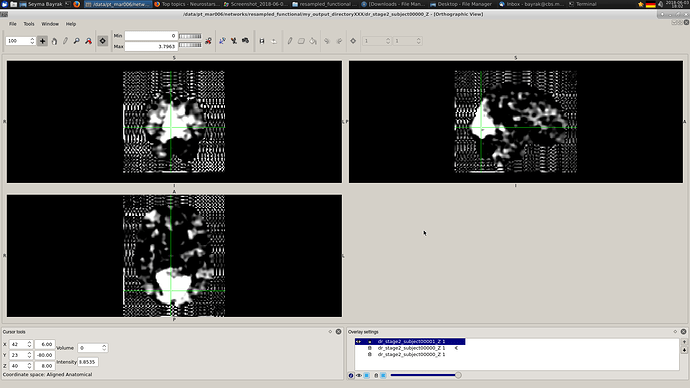 Is there any idea for what might have gone wrong here?

BTW which publication do “8-beckmann-ica probability maps” come from?

Your theory makes sense. Because, when I used the reference spatial networks as provided in this link ( “all 8 components” in MNI2mm):

then, the Z-maps were strange.

But, I re-sampled reference spatial networks to MNI3mm, then there was no blurred signal outside of head. With this re-sampled networks, DL produced reasonable Z-maps.

The question is now, how to get rid of blurred signal outside of head in reference spatial maps as originally lying in MNI2mm.

Small question, is there a typo in the code you posted or why are you passing a value of 10 to the number of permutations?

In any case, to get rid of signal outside the head you could mask your z-maps before running the dual_regression:

Alternatively, if you figure out what your problem is, and you believe it’s safe to ignore it, you can mask your results afterwards and ignore the outside voxels - given that dual_regression is massively univariate.

“Passing a value of 10 for the number of permutations”: I choose it since it was given as a default/example on nipype-fsl-dual regression. No big reason.

You are definitely right, one should get rid of signal outside of head…

Alternatively, I run an fcon script, which does the dual regression step by step. This worked perfectly fine. One of the first steps there was to do fsl_glm on the functional image (${postprocessing_mni_image}), given a single component map (dr_template.nii.gz) with the masking option (${mask}=MNI brain):