We collected a certain amount of resting-state fMRI volumes in anterior to posterior (AP) direction and, subsequently, the same amount of volumes in posterior to anterior (PA) direction. In order to use the PA volumes for fieldmap estimation I should put them in the fmap folder, but I believe these volumes will then not be corrected by fmriprep and put in the func folder for further analysis? But on the other hand, if I put the PA volumes in the func folder for analysis, they will not be used to estimate a fieldmap. I was wondering, what would be the best approach using fmriprep to make a AP-PA field map and still use all the AP and PA data for analysis? We also collected a regular field map, which is geared to the AP data. Is it possible to use this too, or should we leave the IntendedFor list empty? Thank you in advance!

Typical resting state sequences use a Gradient Echo (GE) sequence: the BOLD signal is a T2* artifact that would not be seen in a Spin Echo (SE) T2 sequence. In contrast, FSL’s TOPUP is designed to be used for SE sequences. Both GE and SE sequences show EPI-based spatial distortion. However, for SE images the signal is moved in regions of distortion (it becomes compressed in some areas and rarefied in others). In contrast, with GE images the distorted signal vanishes. TOPUP works by comparing two reversed phase encoding images where the signal has been moved in equal distance but opposite direction. This does not work if the signal has vanished.

For the data you describe, I would use the conventional GE field map you describe with FUGUE to independently undistort the AP and PA GE resting state data. So your field map is intended for each of the two fMRI sessions.

@dglen noted that while TOPUP was designed for spin echo images, these types of methods may work for gradient echo sequences as well. Roopchansingh et al. (2018 and Schallmo et al., 2020 demonstrate TOPUP and 3dQwarp can work well with gradient echo data.

Found another recent paper that looks at this too: 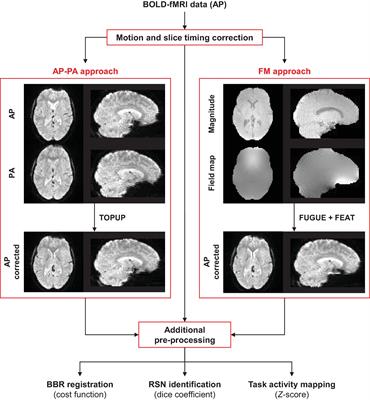 Quantitative Assessment of the Impact of Geometric Distortions and Their...

Functional magnetic resonance imaging (fMRI) data is typically collected with gradient-echo echo-planar imaging (GE-EPI) sequences, which are particularly prone to the susceptibility artifact as a result of B0 field inhomogeneity. The component...