Thanks for providing such great software.

Our lab has used fMRIprep for a while without any issue, however, some recent data collected with GE’s commercial hyperband sequence after a scanner’s upgrade was not processed as expected, that the output from fMRIprep is showing a wrong orientation. For example, below shows the *_space-MNI152NLin2009cAsym_res-2_desc-preproc_bold.nii.gz in Mricron. 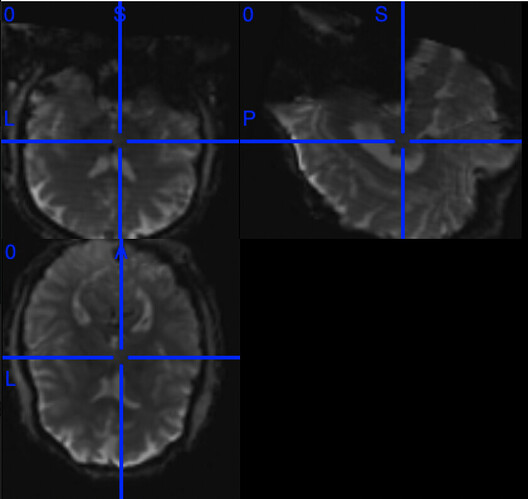 Sorry I can not post the screenshot of the fMRIprep report, because I can only post one screenshot. There was no error or warning, the co-registration looks okay which I think was showing between the SB reference and T1w, however, the CompCorr ROIs and brain mask are showing the wrong underlay with the same orientation issue.

I want to ask:

Thanks in advance for your help!

Sharing the screenshot of the report:

Also for context, I viewed the original func and SB reference data, and they all display in the right orientation to me.

Would be great to get those speculations/questions confirmed by experts:

Any suggestion would be really appreciated.

Hi, thank you for explaining in great details your observations.
The very intringuing thing in your story is the starting point: how is it that the SBref is in different orientation than the func data? Which algorithm did you use for converting the DICOM images to NIFTI (and BIDS)?

Otherwise, to discard quickly the SBref images in your execution (without the need to remove the files), you can just pass the argument -ignore sbref in your fmriprep command (starting from fmriprep v20.2.2).

Also, FYI, if the SBref files are ignored, fmriprep has its own heuristic to build a reference image with better contrast: one strategy is to use the non-steady state volumes that has better contrast than steady-state volumes.
As a side note, I noticed from our data that the realignment step with mcflirt was a little bit erratic when the SBref images were used a a target for realignment, which was not the case when the SBref images were ignored. (more details on this point here: https://github.com/nipreps/fmriprep/issues/2360 ).

Hi thanks for offering help, just to update you after re-checking the data I figured out, for that both the original functional data and the original sbref data, the .json sidecar and the nifti were not generated using a same package and the default orientation of the two packages for .json and nifti are different. When I just use dcm2niix to generate both .json and nifti file, this issue was solved.