Has anyone had any luck generating their own surfaces that can be viewed with connectome workbench? I generally enjoy the renderings and formatting provided by Connectome Workbench over other viewers.

I have Macaque surfaces produced by AFNI’s @animal_warper with the NMT v2 template, which so far has been an excellent tool to use. However, I would prefer to visualize the surfaces using Connectome Workbench. I’ve tried resampling NMT surface files (~41k vertices/hemipshere) to 32k vertices/hemisphere like so:

First, create left and right spheres matching the number of vertices in the NMT surfaces:

Next, but do the same for 32492 vertices so that it can be viewed in Connectome Workbench:

Then, downsample the NMT mid surface with the spheres

The results are really poor: 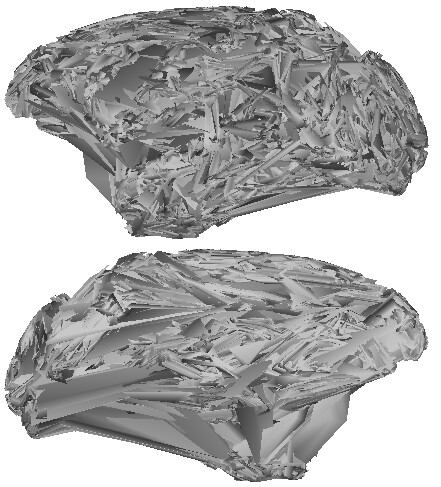 I can’t seem to find any information as to how to create Connectome Workbench compatible surfaces from AFNI. I also don’t know if this is a totally impossible/silly pursuit to begin with!

Any thoughts or suggestions? Thanks!

Hi, did you solve this problem? I also have the same question.

While I’m no expert on Workbench, I was able to view these kinds of surfaces by copying the surface datasets to new files that end with “.surf.gii” instead of just “.gii”. For some of these, wb_view only seems to be able to display by loading as “Other” type and setting the Display option to “Surface” (default is Montage).