I have seen that the MNI152Lin6Asym template is in neurological, rather than radiological, orientation. That is, left is left, right is right. This is in contrast to FSL radiological convention. Can I confirm that this is in fact correct, and there has not been some unexpected changes to transform/orientation at some point in the pipeline?

Hi Gershon, if you are talking about fMRIPrep/TemplateFlow, that is correct. You just need to make sure that all the software in your pipeline honors the NIfTI orientation headers (i.e., does not assume any specific orientation).

Thank you for confirming. Since I am using FSL for post-processing a visualisation, I will assume that left is right and right is left, despite the template being in ‘neurological’ orientation.

Ie., my assumption is that FSL will always present things radiologically.

I would strongly suggest using the NIfTI SForm and QForm to infer spatial orientation of the data. Making a hard-coded assumption regarding the data is asking for unintended consequences. While it might take a little more work up front, the long term code maintenance will be much better.

For example, with this image

The Form suggests that the data is stored on disk LAS (e.g. first voxel on disk is on the Right side of the brain, proceeding Left-ward). While the data below is stored RAS.

Personally, I use the terms “Radiological” and “Neurological” to describe conventions for viewing data on a screen, not storing data to disk. A radiologist assumes they are viewing slices from the patient’s feet, the way we see a participant from the MRI console room while they are getting scanned, hence their left is on the viewer’s right. In contrast, a neurologist assumes they have a ‘birds eye’ view of the head from above. This explains why coronal and axial slices appear flipped between these two views, but surface renderings do not.

FSLview makes this distinction clear, if you click on the “Gear” (“Spanner”) icon you can choose whether “Display Space” is “World” or disk orientation, but there is also a checkbox to toggle between radiological and neurological convention. Likewise, while MRIcroGL always shows images oriented to world-space, it allows the user to choose between viewing conventions (see below).

tldr; but for completeness: One final word of caution when working with NIfTI files. There are actually two ways of defining space: a spatial matrix (the SForm) and a Quaternion (the QForm). In theory, one could use these two independently: the QForm could be the data as acquired on the scanner while the SForm could encode a linear warp to normalized space (e.g. modeling the influence of rotations, zooms, translations and shears). Unfortunately, VTK based tools gave precedence to the QForm (ANTS, slicer, etc), while most other tools gave precedence to the SForm. Therefore, to switch between tools I would always try to keep these two the same, and think carefully about what to do when they disagree. While there are simple transforms between the SForm and the QForm, you need to be mindful that in theory a spatial matrix is a superset of the quaternion. A quaternion can only store translations, rotations and zooms. The matrix can store the full affine set: translations, rotations, zooms and shears. Therefore, any quaternion can be losslessly represented as a matrix, but the reverse is not true. I suspect this is why VTK adopted the QForm precedence: VTK volumes must be rectangular and therefore cannot abide by shears. Fortunately, while shears are common for CT (gantry tilt), they are rare in MRI. Even a full 12-DoF ‘affine transform’ from FLIRT does not model shears. 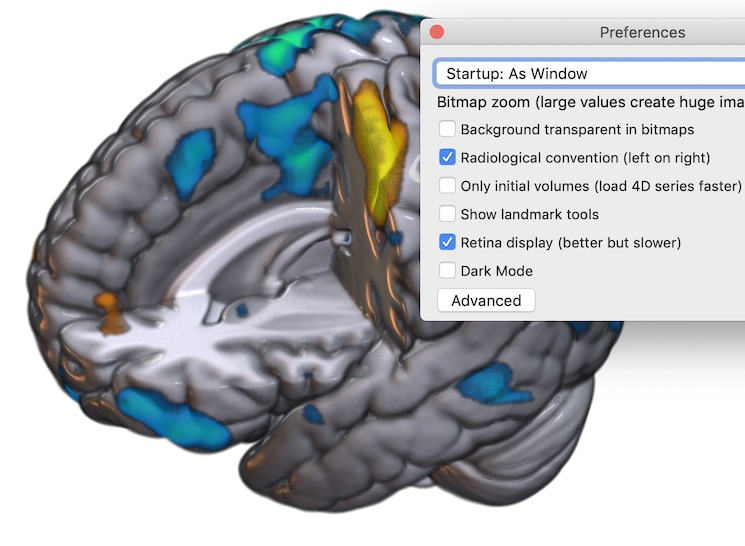 Thank you for the insight regarding this issue.

Indeed, I had a look at the spatial orientation indicated in the Qform.

For example, the template I used in the fmriprep pipeline is MNI152Lin6Asym from templateflow.

This has the following information: 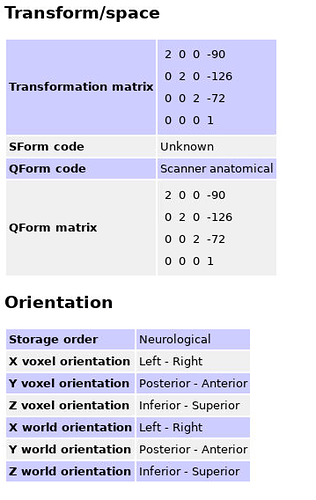 What confused me slightly was the orientation information, namely “Storage order: Neurological”.

For example, when loaded up in fsleyes, does left=left (neurological) or has fsleyes used this information to correctly present this image radiologically (‘from the feet’, left=right right=left").

Given that the following setting is ticked in fsleyes options, I am assuming that I can trust that fsleyes is correctly presenting this information. The left side of the axial slice, for example, is indeed the right hemisphere.

Do you agree with this?

In general I like to use FSLeyes with DisplaySpace set to “world space”. FSLeyes is very clever, and however you use it, it will place the L/R, P/A, I/S labels correctly to map onto the NIfTI spatial transform. While I would personally avoid using the term “Radiological” or “Neurological” to refer to the storage order of voxels stored in Left->Right and Right->Left space, I agree that FSLeyes uses these terms in an internally consistent way. I would provide two caveats: