Musings on Censoring of FMRI Timeseries

Hi experts, this post is to generate discussion regarding censoring of fMRI timeseries.

To operationally define censoring, it is the identification of outlier volumes based on a metric (e.g., Framewise Displacement), and subsequently creating a design matrix of 1’s corresponding to the outlier volumes, and regressing them from the fMRI timeseries (e.g., using tools such as 3dTproject). Eventually, the residual timeseries, interpolated with zeroes in places where censoring took place, is used for connectivity analysis.

Recent studies (Ciric et al., 2017, Parkes et al., 2018) have shown that censoring is an effective method for amerliorating motion artifacts, but one big disadvantage of this method is the temporal degrees of freedom lost. But tDOF loss is relatively unexplored - what is the optimal tDOF for computation of connectomes?

A few relatively unexplored questions I have been thinking about:

How much data does one need for computation of connectomes after censoring? I see papers use the magical duration of ~4 minutes, but this number seems anecdotal at best and not empirically determined.

Does the residual timeseries need to have continuous uninterrupted data? What is the effect of having a big 4 minute chunk of data without any censoring done to it, versus small bits totaling to 4 minutes scattered around a long timeseries?

Are connectivity values in the connectome artificially inflated after censoring? Papers such as Ciric et al. 2017 have explored increase in modularity after various preprocessing steps (i.e. the separability into subnetworks, greater the modularity, greater identifiability of subnetworks). While identification of key subnetworks in resting state data is its canonical feature, I still doubt if modularity is THE metric to chase after. I illustrate an example below why connectomes may have artificially inflated values after censoring.

This particular high motion scan run consists of 300 volumes (2s TR, 10 minutes of data), minimally preprocessed using FMRIPREP. Following preprocessing, I ran 3dTproject with a high pass filter (0.01-inf), and in one condition, included nuisance regressors of 6 aCompCor and 6 motion parameters. In another condition, I identified outlier volumes at FD 0.5mm threshold, resulting in 233 censoring timepoints, 6 aCompCor and 6 motion parameters as nuisance regressors (along with high pass filter described above). The volume-to-volume FD trace is shown below: 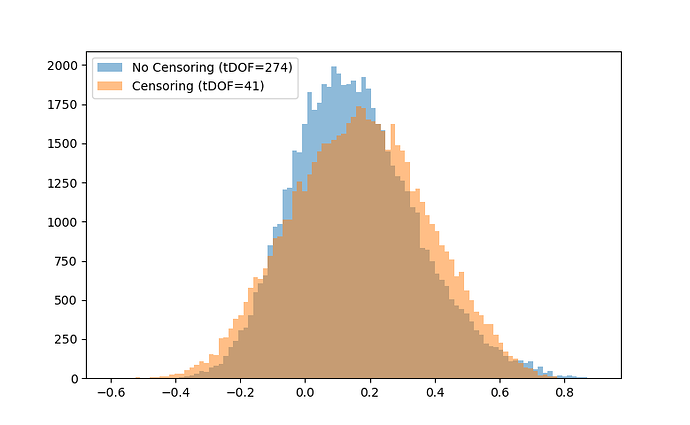 The distribution of connectivity values have become more variable with censoring (presence of more positive and more negative edges). Could this variability be due to the low number of timepoints present in the timeseries?

Using the Newman (2006) modularity algorithm, the value of Q increases from 0.2671 (in non-censored connectome) to 0.2795 (in censored connectome). This increase is consistent with what the Ciric et al. (2017) paper shows, however, is it possible that this increase in Q is due to the fact that number of positive and negative edges have been inflated due to low tDOF, leading to an increase in separability of subnetworks? Does the increase in Q have any meaning if I am left with too few tDOF to work with?

Hi @fmriguy!
Yes I have had many similar thoughts regarding the loss of tDOF but I am typically more concerned with the use of temporal filtering - where you might lose 80% tDOF for all subjects. In this case, you present a subject with really high pervasive motion throughout the scan. For these subjects (mean FD>0.5mm) I would exlcude the subject completely as the data is extremely noisy, motion effects persist beyond the volumes they were recorded, and you have no way of knowing if you have effectively denoised at this point. I have also found that the effects of motion is nonlinear - whereas motion is positively correlated with mean FC from 0-0.5mm, there seems to be no clear relation for subjects with very high motion >0.8mm.

I think it makes sense that the low tDOF is more variable but that there are more positive conenctions in the censored dataset is cause for concern and may be related to the above.

I wouldn’t read into the modularity differences given they are small and this is only 1 subject.