I hope y’all are doing ok in these difficult times.

@jeromedockes and I had some “fun” endeavors running
a one-way repeated anova in nistats (still using the archived version, as the new release within nilearn is not here yet).

The design: I have 3 conditions and 23 participants. Based on that I want to investigate the effect of condition, that is the difference between the three levels of the factor condition, using a one-way repeated anova.
Here’s the design matrix: 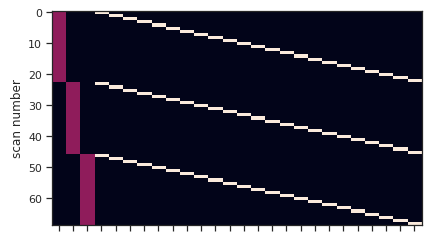 I set my contrast up as follows:

Looks ok, but running the model results in the following error:

Does anyone have any idea what might go wrong (anyone as in @bthirion maybe)?

(3 rows, 3 + n_subjects columns). but the docstrings of FirstLevelModel and SecondLevelModel give no information about 2-dimensional contrast vectors (for “F” stat type, as used in the example)

Yes, the matrix singular because the participants columns sum to 1, as do the conditions columns.
2 possibilities: