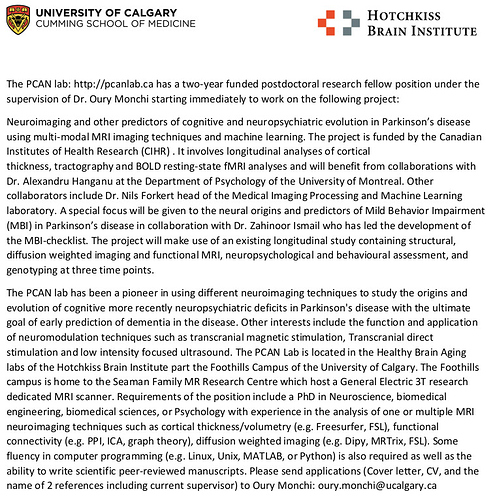 The PCAN lab: http://pcanlab.ca has a two-year funded postdoctoral research fellow position under the supervision of Dr. Oury Monchi starting immediately to work on the following project:

Neuroimaging and other predictors of cognitive and neuropsychiatric evolution in Parkinson’s disease using multi-modal MRI imaging techniques and machine learning.

The project is funded by the Canadian Institutes of Health Research (CIHR) . It involves longitudinal analyses of cortical thickness, tractography and BOLD resting-state fMRI analyses and will benefit from collaborations with Dr. Alexandru Hanganu at the Department of Psychology of the University of Montreal. Other collaborators include Dr. Nils Forkert head of the Medical Imaging Processing and Machine Learning laboratory. A special focus will be given to the neural origins and predictors of Mild Behavior Impairment (MBI) in Parkinson’s disease in collaboration with Dr. Zahinoor Ismail who has led the development of the MBI-checklist. The project will make use of an existing longitudinal study containing structural, diffusion weighted imaging and functional MRI, neuropsychological and behavioural assessment, and genotyping at three time points.

The PCAN lab has been a pioneer in using different neuroimaging techniques to study the origins and evolution of cognitive more recently neuropsychiatric deficits in Parkinson’s disease with the ultimate goal of early prediction of dementia in the disease. Other interests include the function and application of neuromodulation techniques such as transcranial magnetic stimulation, Transcranial direct
stimulation and low intensity focused ultrasound. The PCAN Lab is located in the Healthy Brain Aging labs of the Hotchkiss Brain Institute part the Foothills Campus of the University of Calgary. The Foothills campus is home to the Seaman Family MR Research Centre which host a General Electric 3T research dedicated MRI scanner. Requirements of the position include a PhD in Neuroscience, biomedical engineering, biomedical sciences, or Psychology with experience in the analysis of one or multiple MRI neuroimaging techniques such as cortical thickness/volumetry (e.g. Freesurfer, FSL), functional connectivity (e.g. PPI, ICA, graph theory), diffusion weighted imaging (e.g. Dipy, MRTrix, FSL). Some fluency in computer programming (e.g. Linux, Unix, MATLAB, or Python) is also required as well as the ability to write scientific peer-reviewed manuscripts.