Problem with the fMRIprep (V1.40) report

Hi,
I found the order of Comcorr and AROMA in the report is confusing. As I understand it, fMRIprep first conducted Comcorr, generated most confounds, and performed AROMA in the end. However, the description of ICA-AROMA processing was reported first, and then Comcorr. The command and report are as following:

Hi @Shengdong_Chen, thanks for calling our attention to this.

In principle, CompCor and AROMA are independent and as such, there is no notion of which one should be performed first.

I agree though the text of the boilerplate can be improved. Please send us a draft showing how you would like to see this written, or even send us a pull-request changing it yourself if you feel brave.

Thanks very much
Oscar 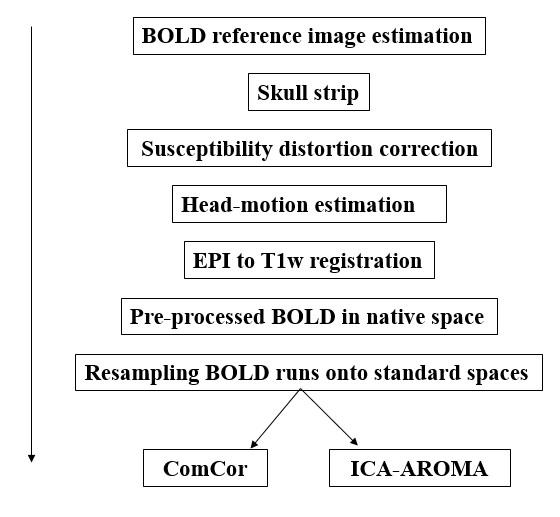 2019-06-21_102700.jpg560×517 46.3 KB
Thanks for your comment. I misunderstood the order of ComCor and AROMA. I posted a flow chart based on my understanding. If there is any Error, please tell me.
In addition, am I right to say that ComCor just extracted the components related to physiological noises, but it did not change the normalized BOLD data, whereas AROMA did change the data?
oesteban June 22, 2019, 4:05pm #4

This would be the “official” flowchart https://oesteban.github.io/ohbm19/#7. As you will see, you basically got it mostly right (head-motion estimation occurs before estimation of susceptibility distortions, and in both cases, it is just estimation). Regarding the bottom three boxes, that seems okay to me.

In addition, am I right to say that ComCor just extracted the components related to physiological noises, but it did not change the normalized BOLD data, whereas AROMA did change the data?

Correct as regards CompCor, partially true in the case of AROMA. The --use-aroma flag will generate two kinds of outputs: 1) -aggressive- noise components in the _confounds.tsv file, which you can use as nuisance regressors; and 2) non-aggresively denoised BOLD data. Normally, you will want to use either option 1 or option 2.

Many thanks for your help!