Hi all. I’ve come across a weird artifact that I’ve not seen before (or seen discussed before) and wanted to see if anyone else had noticed similar things.

Let me caveat this post by saying that I’ve not followed this up super comprehensively, and this artifact may only occur in very specific cases, but I thought it was worth sharing.

Long story short, it appears that transforming a BOLD image to T1w space can induce an odd banding artifact in the data. I suspect this is a byproduct of re-slicing. A (relatively) detailed write-up of the issue can be found here (see the section on “Re-slicing artifacts”), but in summary: 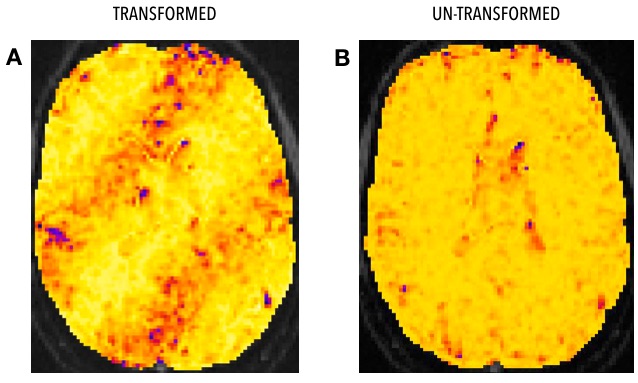 Panel A in the figure above shows the banding artifact in a map of voxel-wise functional connectivity fractional anisotropy (this sounds like a typo but it’s not, see the link above for more info on this weird method), estimated from a BOLD image preprocessed through FMREP and transformed into T1w space. Panel B shows exactly the same thing, but estimated from the un-transformed image.

To chase this down a bit further, I ran MELODIC on the preprocessed data for both transformed and un-transformed images:

Finally, here’s why I think this is caused by re-slicing: 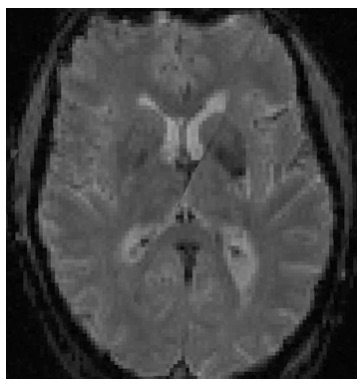 The image above shows how FSLeyes renders the transformed data when displayed alongside the un-transformed data. Closer inspection shows that the diagonal band is essentially the axis along which the most rotation occurs when transforming the image.

Some things that may be driving this:

I’m not at all clear on how much of an issue this actually is in standard practice (though I have reproduced it on data from multiple individuals). It could well be that this artifact gets removed when regressing out the WM signal, or that it only occurs in edge cases. I plan to chase this up a bit more next month once I have more time, but I wanted to share in the meantime to give a heads up and get thoughts from the community.

Is it possible to run your analysis in subject space and just sidestep the issue?

That’s what I ended up doing. I figured I’d share anyway in case it was useful to others.

(By “subject space” I assume you mean on the un-transformed BOLD image, rather than T1w space.)

Hi, I just came across your post from last year. I am about to start a new fMRI project on a siemens prisma, and was testing out some sequences the other day with the following settings:

After converting the raw DICOMs to NIfTI using dcm2niix, I see the same sort of diagonal band when viewing the converted NIfTI file in fsleyes. Note that I have not done any preprocessing to my images. I’m wondering whether you ever saw this again in subsequent scans and whether you observed it in your raw data or only after pre-processing?

thanks in advance for your thoughts.

I haven’t specifically checked to see if this issue shows up in other data/analyses, but it hasn’t jumped out at me either since my initial post. It definitely seems weird that you’re seeing it in data prior to pre-processing; I can confirm I only saw this issue after applying a transform to the BOLD image.

Assuming you don’t see the band when viewing the DICOMs directly, the only thing I can think of is that perhaps dcm2niix might doing some sort of reorienting during conversion. I vaguely remember the old dcm2nii doing this, and this post from Chris Rorden (author of dcm2niix) suggests that this is the case in the new package as well.

Hope this helps, and good luck.

Thanks so much for your thoughts. I have a few more sequences to look at, but in checking some of the raw DICOMs, I don’t seem to notice that band. Perhaps it is indeed some kind of reorienting issue. Will definitely look into that more.

@danlurie just to emphasize that the manipulation dcm2niix does is lossless. For 3D images it permutes the orders of columns, rows and slices as saved on disk to provide RAS space. There are 48 possible combinations for losslessly permuting data.

For these datasets, I would also look for artifacts in the slice direction, rather than only showing images in the 2D axial plane acquired by EPI. I wonder if some of these are related to motion artifacts (spin history effects) and slice interference. Looking at sagittal and coronal views for these axial sequences may reveal these effects.

The Siemens Prisma has outstanding gradients for slice selection and RF signals that have close to the desired profiles. Regardless, in my experience it can often be beneficial to add a tiny gap between slices. This reduces both interference between slices as well as motion-induced spin history effects. There is a natural desire to want to sample as much hydrogen as possible, so choosing zero slice gap can be alluring. However, you need to realize that slice selection and RF transmission are never going to be ideal.

It might be worth noting which head coil was used for the multi band 4 images and whether any other form of acceleration was used (e.g. in plane SENSE or GRAPPA). Higher multi-band factors may show aliasing, in particular if you use a low-dimensional array coil. It is clear that the 20-channel Prisma head(16)/neck(4) coil was designed for multi-band, while the older 12-channel Trio was not. However, you need to be watchful. I provide my own notes on this topic here. You may want to insert the BIDS JSON sidecar created by dcm2niix into a reply if you want further thoughts on your sequence.

These comments are particularly relevant to @dfareri who is describing images that have not been preprocessed.

Thanks for your thoughts, @Chris_Rorden. I’m attaching the JSON file generated by dcm2niix here as a text file.

Any additional suggestions you might have would be much appreciated.

Thanks, no other comments.