Hello,
I am trying to use tedana after preprocessing ME data with fmriprep 22.0.1
The cmd that I am using is:
tedana -d *${task}_echo*nii.gz -e ${ECHOS} --out-dir ${out_dir}/${task}_${SPACE} --prefix ${sub}_${ses}_${task}_${SPACE}
The problem is the the output data seems like good data was cleaned out and an artifact was introduced (see attached “cleaned” in red).
I am wondering if there is any way to improve the results without manual component selection 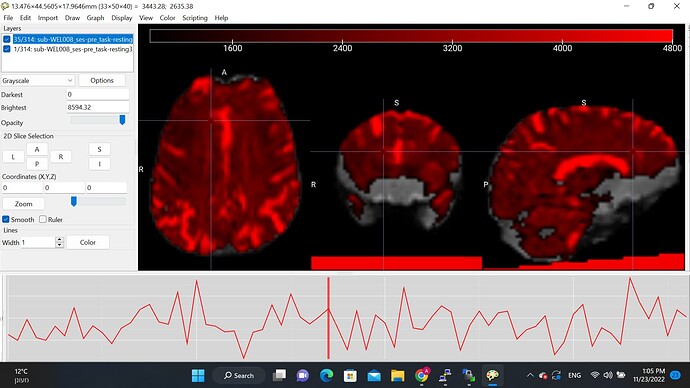 When you say an “artifact was introduced”, are you referring to the red overlay having much less brain data? If so, you can run tedana with a mask option, see here Visualisation of component beta maps using Tedana - #4 by dowdlelt That may solve that problem.

It may also be useful to provide other details about this data - such as field strength, number of echoes, number of time points, TR, TEs, acceleration, voxel size, etc - but if it is just the masking issue, then that may not be needed.

Hi Logan,
Thanks for your response!
So I assumed that the parts of the brain that were lost are due to signal that was interpreted as noise, in that case, that same components may have been removed from other voxels that still appear to have some signal in them, which made me concerned about the integrity of the output. Also at the bottom of the fig you could see a red surface with increased intensity that seems to have been added by tedana.
I will definitely try running with more info as suggested and see what happens.

A few clarifying points - the areas that were lost were due to masking performed in tedana. Sometimes this is too aggressive (removes too much of areas with signal dropout), and in many cases it may be better to provide your own mask - so I think running it like that will help you. Masking is separate from the denoising step that selects components to keep or remove.

The ‘removal’ of components will never completely erase voxels from the image. You are right that tedana is attempting to find signal and noise but removal in this case is removing the contribution of those noise components on the voxel timeseries - not removing the voxels. Its like adding in motion regressors or polynomial terms into the model - they capture some of the variance in the data, but don’t change which voxels are there/not there.

For the red band at the bottom, that looks like just an effect of the visualization, I think. I haven’t used fsleyes in a bit, but I really don’t think it it is anything to be concerned with.

To better understand how denoising performed, take a look at the HTML report generated by tedana which shows the timecourse/spatial maps/FFT of components. You can also use the excellent tool RICA to look through them even faster.

Thank you!
Much appreciated