Hello,
I’m a relatively new user of fmriprep, which I have found to be fantastic so far. I’ve been working with IT support at my school to upgrade from v0.6.6 to v.1.0.3 on our cluster. We were able to get v0.6.6 to work after a bit of trial-and-error, but we’re hitting a snag with v.1.0.3. Specifically, while it seems as though all of the processing steps may be running correctly with v.1.0.3, we have not been able to get the html report to be generated properly. At first, it looked like we were having an issue because svgo and cwebp were not installed and set up. However, they have been installed and added to the path, but the html reports are still missing information. For example, the image displaying the corrected anatomical T1 image registered into MNI space, both in the html report and when the svg is opened directly in a browser. Here is a sample t1_2_mni svg: 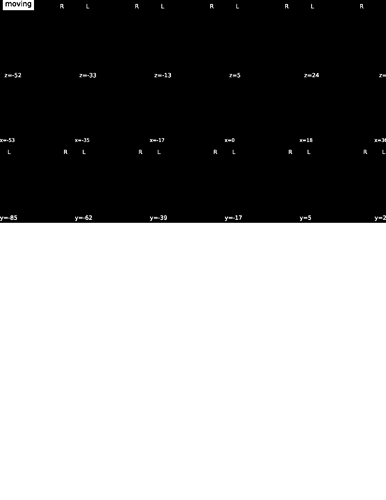 t1_2_mni.png1700×2200 4.57 KB
It looks like the registration was performed correctly when I view the nii file. Also, the frames displaying the images in the html report are truncated relative to what I was getting with v0.6.6
Does anyone have suggestions for how we might be able to fix or troubleshoot the issue?
Thanks very much for your help.
Steve
Retrospective tagging
Steve_Wilson January 25, 2018, 8:05pm #2

Here is an example of the truncated frames in the html report: 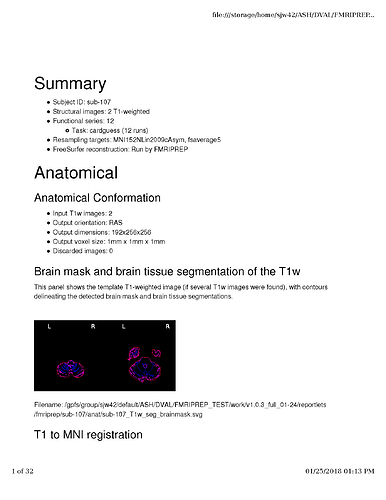 At present you need to open with Chrome/Chromium.

In a move to reduce size, we used the webp codec for the bitmaps, instead of png. Firefox does not render webp yet.

This is most likely caused by your web browser not supporting WEBP image compression. Could you try opening the report in Chrome?

This will change when we switch to another format (see https://github.com/poldracklab/niworkflows/issues/142).

Thank you both for the quick replies! Opening in Chrome instead of firefox did indeed take care of the missing images. The images are still truncated (only seeing first two cells of montage), but it’s certainly something that I can work around. I’ll also see if it has anything to do with our install of Chrome, as well as try Chromium to see if that works better.
Thanks again,
Steve

Could you share this report? I can have a look.

Thanks, Chris. I’ve uploaded a zipped folder with the html file and figures here:
https://we.tl/wddOrajR1R

Hi Chris - I’m very sorry to bother you, but I wanted to send a quick follow-up. Did you happen to have a chance to take a quick look at the report that I shared? No problem at all if you haven’t - I am sure that you are very busy!

I got the same thing - not sure what is going on. Opened an issue: https://github.com/poldracklab/fmriprep/issues/952

Thanks for submitting the issue!

Hi @Steve_Wilson, this is hard to replicate. Could you give the latest release (1.0.12, should be out in one hour from now) and see if this is not happening anymore? We have modified some elements of the reporting system that may have solved this.

Any news on this problem?

The latest versions of fmriprep took care of this issue - thanks for checking @oesteban!