About these data of “train illusion” experiment, why don’t people think both the train and the self are moving at some speeds not close to zero? And if they identify only one part is moving, why some people expect a very small speed of the other object?
Thanks! 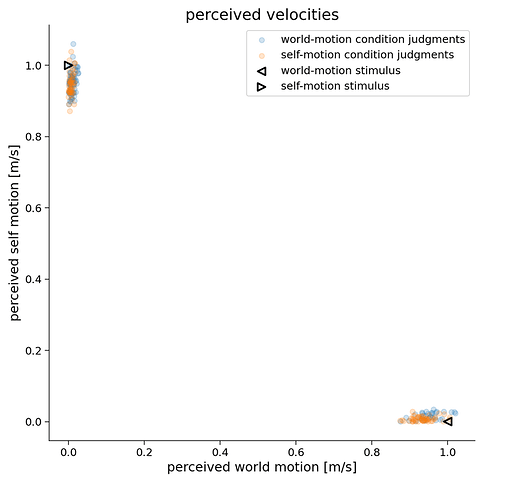 Good question! Did the model you created during the tutorials show similar behavior? If yes, does that give you insight into why people tend to perceive one or the other moving rather than both?

Maybe you could make a “why” model. In the real world, is it more likely that 2 things starts moving at the same time or that 1 is still and 1 is moving? How should this bias estimation?

Thanks for reply. Yes, I find from the tutorial later that there tends to be a threshold value on the optical signals. And above it, people could tell if it is self-move or train-move.

This why model sounds not easy.

I guess I could add experiments of several scenarios that the train and people moving simultaneously, and get some data on people’s judgments on velocities. Next, I would have a graphics of data in-between, and build new assumptions and models on that.

I think of it this way: the visual information is very accurate at estimating the total amount of movement. The vestibular information is not, but that is what is necessary to decide if there is self motion or not. After deciding whether or not there is self motion, the brain should assign it to sources. As long as the vestibularly estimated velocity is compatible enough with either zero (in case of world motion) or the opposite of the visually estimated velocity (is case of self motion) there is no need to assume there are two sources. So the data as we simulated it (it’s not real data) would only happen with low acceleration and where the velocities are equal. There could be many different situation as you sketched them: with both self-motion and world-motion, but they would require modelling source attribution much better - so we kept it simple.

Yes. I am interested in the width of the “fusiform” data when people judge the speed of both objects. I would like to add some experiments on both of them moving because this can give some insights into how people judge speed of things.

I would hypothesize that people would have larger deviation on the speed judgement, with both of them moving. And I could start from a simple model that there is a linear relation or quadratic relation between 1/velocity_diff and the width of “fusiform” shape data.

I am interested in the question: how people judge the speed of a transportation or themselves. Maybe it depends on experience so that people can feel correctly and give an accurate answer, like a seasoned driver.

I haven’t thought through how to link the mechanism of judging velocity with these new experiments. But I think there could be a connection …

Sorry for replying so late. The papers at the end of the tutorial should provide some hints, even if only for starting you lit search.

I’ll try to give some info, but remember that the data in the tutorial is simulated (not real), and that I don’t work in this field!

Jean Laurens and Jan Drugowitsch are involved in NMA (as mentor and lecturer iirc) and do related work - I bet you could ask them.

Experience may definitely play a role. In one of the cited papers (Seno & Fukuda, 2012: https://doi.org/10.1163/18784763-00002394), they had people see a train through the windows and sometimes the open door in the inside of another train. With the open door, there is more velocity information, so it might increase the occurrence of illusions or the judgements of self-motion velocity. However, it decreased instead. The authors think this is because participants know that trains with open doors don’t move, so it has to be the other train. So it doesn’t just depend on experience with motion, but the higher-level (more cognitive, not sensory) situations in which various kinds of motion occur. It might be that people who’ve never been on trains do not experience illusory self motion with these types of stimuli.