Hey y’all, has anyone figured out in T1 Demo3 how to analytically get another pair of rewards that share the same value function? My brain is too exhausted to function at this point…

Also in T1 Ex2, why in the solution they used

to reset the TD error for all trials instead of

The take-home message from Section 3 might give you enough of a hint for the guessing game.

did you mean as long as the sum of the unit is 20, because the animal don’t care?

The thing that matters is the expected reward. The expected reward from (0.5 x 6) + (0.5 x 14) = 10. Any other pair with the same expectation should work. The same principle is at work with the probabilistic reward in the next section too.

T1: Can someone help me understand how to derive the equation here?

From the Markov assumption to the first line, it’s just re-writing the value function as the expected sum of rewards, and then separating the first term of the sum from the rest.

If not, can someone explain how they are related?

I believe this is from the old version of T1. It was updated last night.

Let’s talk about what is being represented here: 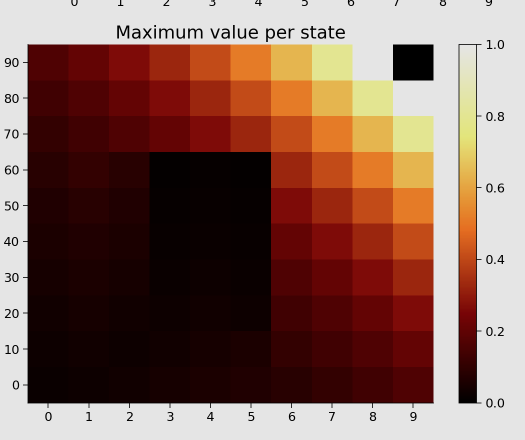 That’s the value function: each square represents a state, and the color of the square represents the value of that state. The value is the expected sum of (discounted) future rewards. The range is between 0 and 1 because there’s a reward of 1 in the upper-right corner. Thus, the maximum value is one. The other values are <1 because the agent can access the reward from multiple routes, but longer routes lead to more discounting and, thus, values that are lower than one. 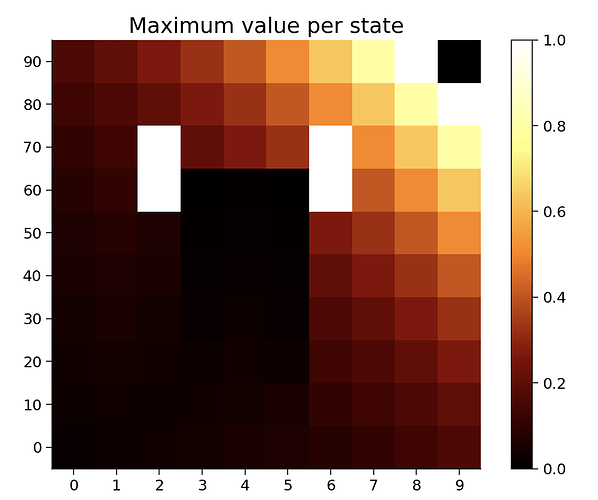