What does echo suffix mean?

I am working with a sMRI dataset. In this dataset I got several files for each subject (different session dates and several runs per session). I only want to use the images from the first session and the first run of that session. In addition, for some subjects I got also several files with different echo suffixes (echo-01,echo-02). Does someone know what these suffixes mean? What’s the difference between echo-01 and echo-02 for instance? 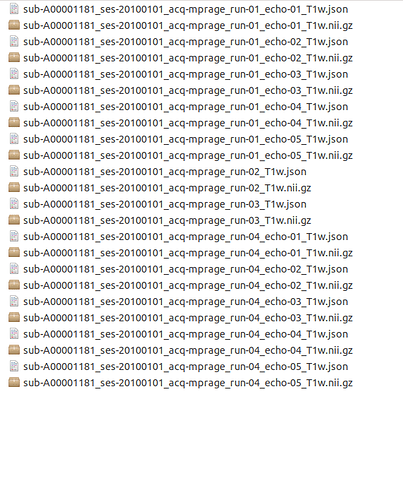 I found some information about the images:

So it might have to something with this 5-echo multi-echo MPRAGE sequence. But I still don’t know how to handle these multi-echo images. Any help on this greatly appreciated.

According to the FreeSurfer FAQ, the best (and probably easiest) thing to do is to use the root mean square across echoes. I imagine the resulting averaged T1w image would be good to run through FreeSurfer or for coregistration/normalization or whatever else you want to do.

Okay. So if I got the FAQ right, the recommendation would be to ‘average’ these MEMPRAGE images first prior to preprocessing? I would like to preprocess the files using CAT12 (segmentation, registration). As you can see, I only got MEMPRAGE images for some runs but not for every run. So apparently, only in some runs MEMPRAGE was used but in other runs only the normale MPRAGE protocol. My question is: Would you say, that averaging is mandatory here? Or is it in theory also possible to just use the first echo image?

As you can see, I only got MEMPRAGE images for some runs but not for every run. So apparently, only in some runs MEMPRAGE was used but in other runs only the normale MPRAGE protocol.

I don’t think run really matters, since it’s all in the same session. Assuming that sessions are defined in the typical manner, the difference in acquisition time between consecutive runs of the anatomicals is probably like 10 minutes.

Would you say, that averaging is mandatory here?

I couldn’t say. The two main differences between MPRAGE and MEMPRAGE seem to be the (1) multiple echoes and (2) higher bandwidth in the MEMPRAGE. According to this FAQ:

By default, we use a multi-echo MPRAGE (MEMPRAGE) as this provides a number of benefits over a conventional MPRAGE. The method acquires 4 separate structural scans with different TE values ranging from 1.5 to 7 ms, but in the same time as a conventional scan. This is achieved by using a much higher bandwidth than is usual in an MPRAGE. The higher bandwidth means the image is acquired more quickly and suffers less distortion than an MPRAGE, although image SNR is lower because the wider bandwidth picks up more noise. This SNR deficit is recovered by averaging the 4 separate images together.

I personally interpret this to mean that, at least according to this group, averaging is necessary or else you will suffer from substantial SNR loss.

Or is it in theory also possible to just use the first echo image?

If you did use only one echo, I think you’d probably want to grab the echo closest to the standard MPRAGE echo time. MPRAGEs tend to have TEs around 3-4 ms in my experience, so I’d say that the second echo is the closest.

I’m definitely not an expert, so please take that idea with a grain of salt.

Thanks a lot! That really helped me both in understanding what MEPRAGE is and what options I have. I also had the idea to take the ‘closest’ echo image. I will check on the echo times and either choose only one echo image or follow the FSL suggestion and average them.