What file format is DTI tractography stored in?

First time posting here, let me know if I’m doing anything wrong. Might be a silly question but can anyone clarify what file format DTI tractography is typically represented as?

I know that one option is .fib files which are used exclusively with DSI Studio (I think). But of course there is plenty of other software that can perform tractography. What file formats do other software packages, e.g. FSL, store tractography in?

Most of the FSL tools use NIfTI images that do not explicitly encode streamlines. For example, drift will generate the principal vectors (V1) for each voxel, likewise you can create Tract-Based Spatial Statistics. This practical provides. examples and visualization with FSLeyes. Likewise the Tractography Practical. I have always used probtrackx with voxelwise data, but you can use streamlines. GIfTI is the preferred format and they provide surf2surf for format conversion,

Thank you Chris for the help and the links.

So in general what you’re saying is that tractography is never explicitly stored from a file, but instead whatever tool you’re using (e.g. probtrackx) calculates them on the spot for visualization, is that correct? (e.g. with the FSLeyes practical you linked, the end result seems to be multiple files such as mean fiber orientations and parameter estimates that together form a complete picture of tractography)

Sorry if I’ve misunderstood. I should mention that I’m not too sure what the term “streamlines” refers to. Does it refer to the maximum number of possible tracts calculated from a given voxel when doing probabilistic tractography?

Most FSL tools. work with voxels. In the image below, the top left shows a diffusion derived scalar value (FA in this case, but MD, MK, etc are other scalar. diffusion measures). Each voxel of the image has a single value associated with it. The left middle and bottom panels shows voxelwise vector values for principle directions shown as RGB and as lines. Here, each and every single voxel has three values associated with it, corresponding to the principle direction of diffusion. FSL uses NIfTI as its format for voxel-based data.

The right panel shows streamlines fitted to the. data. The number of streamlines computed is independent of the number of voxels, and a single streamline can traverse the space of many of the voxels from the image that was used to generate streamlines. You can create these with DSI studio’s “Save tracks to a file”. Common formats are TRK, TCK and VTK.

The AFNI tracking output for tract files are *.niml.tract files. “NIML” stands for “neuroimaging markup language”, which is what AFNI uses to pass around information. This is a pretty simple format with a bit of header and then tract bundle locations (basically, one per voxel where the tract runs).

These encode the grouping of individual tracts into a “bundle” structure, which is useful for visualization of structure when more than 2 target ROIs are input into tracking. In the figure here: 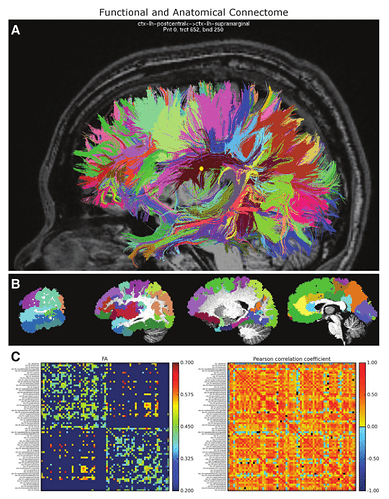 afni_tract_bundle756×970 907 KB
… the tracts are visualized in AFNI’s SUMA GUI in Panel A, where they are colored by bundle (each bundle’s identity is also associated with a string label, comprised of the 2 target ROIs it connects). Panel B shows the ROIs used as targets in this example (a cortical parcellation from FreeSurfer, I believe, here). Panel C shows the structural property matrix (left) where bundles are found, as well as the functional connectivity (i.e., correlation) matrix (right) of those target ROIs. In SUMA, tract coloration by local orientation (standard red=LR, green=AP, blue=IS) is also directly possible.

Thank you again Chris for taking the time to give such a detailed answer! I really appreciate it.

Thank you very much! This is exactly what I was looking for, your explanation was very clear and helpful. And I finally have some leads as to what to Google next to learn more about this stuff. Thank you for the help, it is much appreciated.