Hello, I’ve recently preprocessed some fMRI data with fMRIPrep and I was interested in having the data in a surface space, i.e. a mesh, so I used the --output-spaces fsnative command for that.

I now have the output data and I wanted to have a look at some specific regions but since my BOLD signal data looks like this: 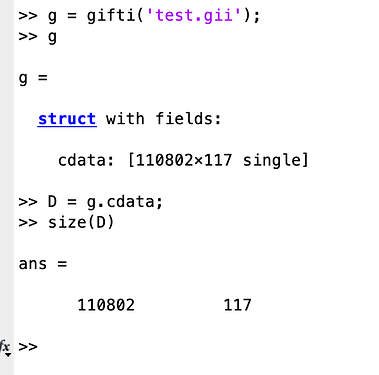 As a vertices x timepoints array (in particular, 110802 vertices x 117 timepoints). Now, I’m not sure how to proceed.
By the way, this code was done with MATLAB and I used this Github library to open the .gii file.

Is there any default brain atlas for brain parcellation in fMRIPrep? Or is there any other way I can extract the areas from this array?

Thanks a lot,
Arnau.

I’m a fan of the Schaefer 2018 parcellations, which are available in several fsaverage versions. I’ve never tried warping a parcellation to native space, but some version of this command might work, or use a standard output mesh (e.g., fsaverage5).

My (R and knitr) tutorial might help; the logic of reading and working with giftis in R is pretty universal (or perhaps you’ll be inspired to try R