I get “command not found”. I dug around the previous posts here and I suspect I have to set up my “environment” but not sure what that entails.

Welcome to NeuroStars and raising this question! From your call it appears that you are using my paths. May you please try using your paths that have your raw imaging data and where to place the derivatives (likely at the same level where I placed mine). I also had the FreeSurfer license file near a top level of my computer that would need to be changed too.

Here is what I actually entered:

Thank you for sharing your command line inputs! This appears to be a sourcing issue. If you may check inside of /Users/juju/.local/bin fmriprep-docker should be there and calling it from there should allow fMRIPrep to be found and able to run

Thank you franklin, I looked through the folder in search of the fMRIPrep-docker.py with no luck. Running the installation script doesn’t seem to help. Perhaps I am missing another step?

Hi @jd-lobo, the problem appears to be that you have a Python environment whose bin directory isn’t in your PATH. Can you try:

If that doesn’t exist, then you probably just have a bad installation. Try:

The path prior to fmriprep-docker will be a path you need to add to your PATH environment variable. For example, it looks like you’re using bash, so if you had the same result as above, you should add to your ~/.bashrc:

If you had /Users/juju/.local/bin/fmriprep-docker, then you would add:

1 Like
Cannot connect to the Docker daemon for fmriprep-docker even though docker is connected
Nikki_Puccetti December 31, 2019, 6:53am #8

Hi there - I was having similar issues as @jd-lobo and we are actually operating from the same server at the same university. I was able to add the path to my path environment variable, which solved the “command cannot be found” issue, but instead I got the following message:

I emailed our IT guy, as it make be about permissions on the server but I also wanted to check in here to see if neurostars had an idea?

Yes, this looks like a permissions issue with regard to Docker. In shared environments, it can be worth looking into Singularity, as that tends to be more to system administrators’ liking.

Thank you! Got it to run with 1 subject but now I seem to have bumped into a memory issue. I’ll start a new thread.

I tried to install fMRIprep in a new computer via docker. I ran the installation and received this message:
#starts here
Creating /Users/jlobo/Library/Python/2.7/bin

changing mode of /Users/jlobo/Library/Python/2.7/bin/fmriprep-docker to 755

The script fmriprep-docker is installed in ‘/Users/jlobo/Library/Python/2.7/bin’ which is not on PATH.

Consider adding this directory to PATH or, if you prefer to suppress this warning, use --no-warn-script-location.

You are using pip version 18.1, however version 20.0.2 is available.
You should consider upgrading via the ‘pip install --upgrade pip’ command
#ends here

How can I fix the path?

Hi, I’ve got similar problem. And I’m very fresh to both fmriprep & docker. I’ve downloaded Docker, followed the tutorial and instruction (downloaded latest image and fmriprep) and when I try to run code with that syntax it says fmriprep-docker: command not found.

so I’m not sure where’s the problem. When I uninstalled and reinstalled there was only one warning:

WARNING: The script fmriprep-docker is installed in ‘/Users/sztuka/.local/bin’ which is not on PATH.
Consider adding this directory to PATH or, if you prefer to suppress this warning, use --no-warn-script-location.

But I’m not sure what does it mean.

The problem is that your PATH environment variable does not include $HOME/.local/bin. You can add it in your .bashrc (or equivalent):

Thank you it worked!

I’m having a similar issue. I installed fmriprep via docker and when I typed
find ~/.local -name fmriprep-docker, I received the following: /Users/myname/./Library/Python/2.7/bin/fmriprep-docker

It looks like it installed using my Mac’s version of python 2.7, but I have 3.8 downloaded and would like to use fmriprep via 3.8.

I’m not sure how to modify my path or re-install fmriprep so that I can use it in this way.

If you’re not already using Anaconda to manage your Python environment, I would highly recommend it.

Hello,
Thanks to everyone for this thread! I am also very new to fMRI prep, and I’ve been getting a similar error.

I get:
fmriprep: Could not find docker command… Is it installed?

When I try: echo $PATH

I see fmri-prep in the list of paths. Did I still not handle the path correctly? Is there something else that I mishandled? Thank you so much in advance for your help!

Do you have Docker installed? 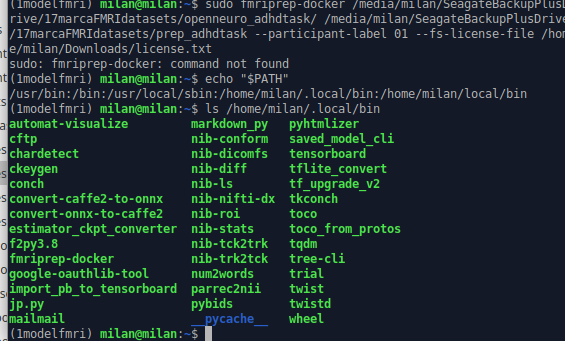 Could somebody explain what’s the problem in my case? I were trying to add proper paths and I still have this error “command not found”

Have you installed the docker image? Is it running prior to typing the fmriprep command?