Thanks for chiming in, Chris.

I just realized that I used the dock-pull to get the fmriprep docker image, it explains why I can’t use fmriprep-docker

Once installed, the fmriprep-docker wrapper has access to the different versions of the docker image (the ones you get with docker pull).

There is a subtlety here about the version: instead of using latest (which is the default when you don’t tell docker which version to be used), please always point to an existing version.

That is the best way of making sure you don’t introduce fmriprep version inconsistencies if you do not run all your subjects at once.

Thanks for pointing this out.
I tried to install fmriprep wrapper by pip install --user fmriprep, still I cannot run the code:

I guess I have this problem because I messed up the different version of python or something, because I can’t even use pip list --user: 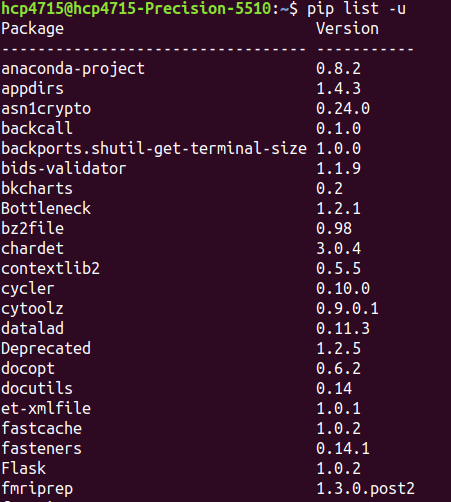 I tried to search for solutions, but only found this github issue page which I can’t fully follow: https://github.com/pypa/pip/issues/6194.

Yes, it seems you have a bit messed up environment.

These things are annoying, sorry. It usually happens when you have a couple competing environments. I would recommend running the following several times until it says it can’t do anything:

If that doesn’t work, you could try installing it without --user (uninstalling again, first). Assuming you have permissions to do it, it’s more likely to work.

Thanks you both!
I still have an environmental error.

This might be a deeper problem. You can try pip install --user --upgrade pip, but I have a suspicion that it’s just broken. There may be a better solution, but at that point, I would personally just delete my ~/.local directory and start from scratch.

What is the output of:

Oscar, below is the output (no output for env | grep PYHONPATH)

Chris, you are right,

Is there some links for delete .local and start again?

(I’ve no idea how I broke it

I really just meant rm -r $HOME/.local. But note that that’s pretty drastic, and will remove a lot of things you have installed. If you’re content to reinstall things as you need them, then it should be fine. But you might be able to try something a little more confined like:

I’ll note these are potentially dangerous things to do, so it might be worth googling around to see if there are better ways to fix things. 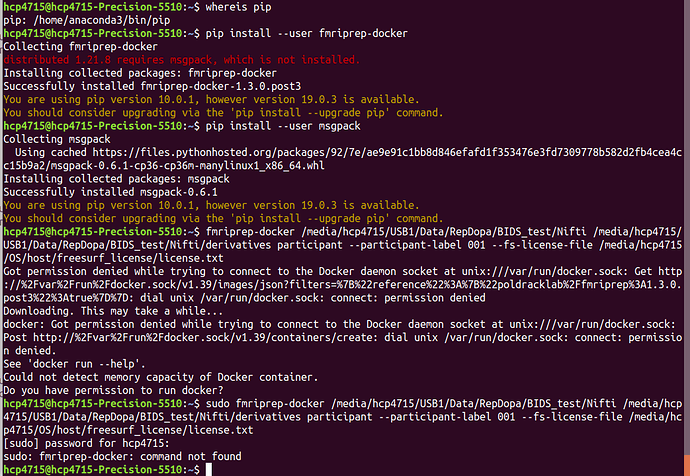 Your root user will have a different PATH than your own user, so fmriprep-docker will not show up to the root user. You can try:

But that may not have the right PYTHONPATH environment to work with. The better solution is to give your user permission to run Docker images. See @oesteban’s comment here:

Manage Docker as a non-root user

Hi @Shengjie_Xu, What you are reporting is a consequence of the defaults when you install Docker (i.e., it doesn’t have to do with fmriprep or fmriprep-docker). Please have a look to their documentation if you want to be able to run docker as a non-root user (which is highly recommended). Incidentally, following up the guide will allow you to use the fmriprep-docker command.

Thanks. tried your first solution, seems that it can find the fmriprep-docker install by pip install --user

Your root user will have a different PATH than your own user,

Maybe because I mounted Filesystem Root and /Home at different partitions of the disk?

Maybe because I mounted Filesystem Root and /Home at different partitions of the disk?

No, it’s just a different environment. You can probably resolve it by installing fmriprep-docker to your system-wide Python installation:

Thanks so much, Chris.

I will try to figure out the environment (s) first, seems a bit complicated. I only knew that conda can be used to set different environment, didn’t expect docker also related to env.

I figured out that I set the python 3.6 from anaconda as my default, instead of directly installed by command from terminal. That caused the permission problem of pip upgrade problem. I solved it by modifying the permission of anaconda.