I’m doing quality control on a TBSS analysis and ran in to an interesting problem. For the most part, my data looks good: 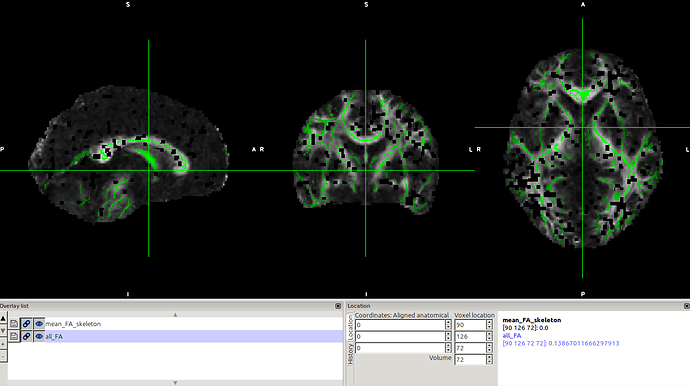 But some of it is super warped and I don’t know why:

I’ve looked through the individual files and all the scans look like they’re high quality, properly pre-processed images. Any ideas why this is happening?

Any suggestions are welcome!!

Also, the first subject looks really strange, like it has holes inside. The original data looks like that?

How were the data pre-processed? I ask because I ran into an issue of orientation leading to weird warps during TBSS. I solved it with fslreorient2std on the tensor maps.

The holes were from one bad subject who didn’t finish the scans. Removing that subject removed the holes, but the other subjects are still warped.

I used QSIprep to do all of the pre-processing. It’s the exact same scanning protocol for each subject so I don’t believe it’s been flipped. I’ll dig in to the files and make sure though, thanks for the suggestion

QSIPrep is where I had the issue as well and yes, it is flipped. QSIPrep compels images to LPS while TBSS’s templates are RAS. For whatever the reason, most people will warp from original QSIPrep’d output space to FSL MNI just fine but others will have very bizarre warps. Reorienting files prior to TBSS seems to fix it.

Oh that’s awesome! I was thinking we might have to re-run it with the registration comparing each subject to each subject. With over 100 subjects that was going to take a while… Just to be clear, you only run fslreorient2std on the subjects who were warped? The fsl manual says “it will only apply 90, 180 or 270 degree rotations”… This would imply that if it’s correct, it will make it incorrect.

Thanks again for the help!!

I ran it on everyone, because everyone comes out in LPS. So, after running DTIFIT (or mrtrix’s dwi2tensor + tensor2metric), I reorient everyone’s tensor maps. Don’t do it before that otherwise the bvec files QSIPrep writes won’t be valid for tensor estimation

It worked!! Thanks for the help, I never would have figured this out on my own.