I am currently using tedana_wrapper.py to combine multi-echo data. The script runs smoothly, but the optimally combined data appears to be tilted.
Looking at the intermediate files I can see that this happens at the beginning of the script, i.e. after applying 3dZcat (see attached). Would you know why this change in orientation is happening, and is there any way to prevent it? AFNI does mention that I should consider running 3dWarp -deoblique, but this just does the exact same thing to the orientation.

Many thanks
Best regards,
Bram 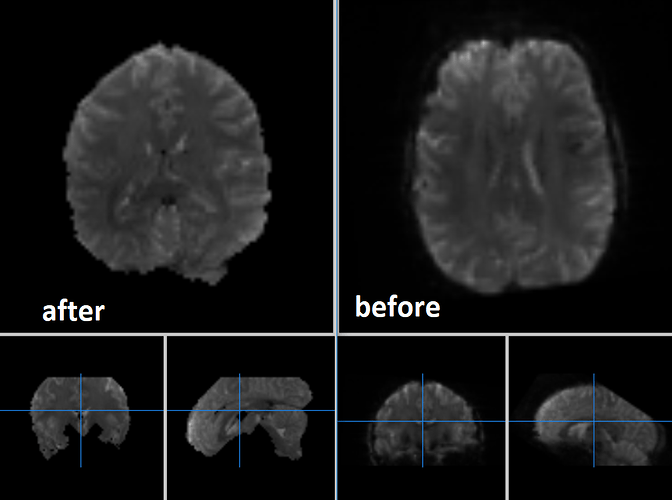 What version of tedana are you using?

It sounds like this is the tedana that ships with AFNI which – although it inspired the tedana @tsalo and I work on – is actually quite different in its internals. If there are any folks on here who monitor AFNI questions, they would be the experts on why you’re seeing this image orientation change ! Or you could post on the AFNI message board.

Thank you for your reply. You are correct. I was under the impression that I was using your version after running pip install tedana, but somehow got lost in the process and ended up using the AFNI version.

I am guessing that it has something to do with the environment trying to use python 2.7 (which I don’t understand, because it has version 3.7 installed)?

Just to see what happens with the orientation I ran t2smap, and I can gladly say that the orientation was preserved. Really keen on getting the ‘correct’ tedana to run, would you have any advice?

Many thanks,
Best regards,
Bram

Indeed, tedana requires Python 3. I’m not sure what happened, but my guess is that the Python 3 miniconda environment wasn’t activated when you called pip install tedana?

I have tried to run tedana a few times, but the process was killed due to memory error (which seems odd with 32gb RAM/25gb swap space?). I have also tried running it with compressed files but it just seems to get stuck, running for several hours on a single subject dataset:

Apologies for the beginner questions. Your help is much appreciated.

We’ve seen memory issues happen once before, but I think solving the issue kind of fell onto the back burner. I’m sorry to see that it’s affecting your data. We will move it up the queue and try to resolve it soon.

Would you mind sharing some information about your data to make it easier for us to replicate the bug? I’m thinking total file size for one echo, size in X/Y/Z dimensions, and number of TRs should be sufficient.

Not sure it this will be of additional value, but I also get a memory error when running t2smap with --fitmode ts:

Did you have any luck fixing the bug?
If there is anything that I could share/do that might help, just let me know.

Would you mind pulling this branch and running tedana from that to see if it reduces the memory use?

This did appear to help, though it mentioned something about not being compatible with the low memory option:

It didn’t run completely because I ran out of disk space with verbose set true, but it definitely got a lot further than the last time. I am only wondering how/if we could get a full T2* timeseries. I was expecting that t2svG.nii would contain the timeseries, but this appears to contain only a single volume/map. I also tried running t2smap with ts mode again, but this still throws a memory error.

That’s good to hear. The warning is expected, because IncrementalPCA doesn’t support MLE dimensionality estimation, so we instead default to the Kundu decision tree for dimensionality reduction.

As you said, you can generate FIT T2*/S0 estimate time series with t2smap. We can look into the memory errors there. However, we don’t support FIT within the tedana workflow because the T2*/S0 estimates are so noisy. We would also recommend not running FIT with only three echoes. I would think that that would require something in the range of 6-8 echoes to get reliable volume-wise T2* and S0 estimates. The default is to generate single T2* and S0 maps representing average values over time.