This seems to me like a basic neuroscience question, but it’s surprisingly difficult to find a solid answer:
What is the interpretation of ‘negative activation’ in fMRI in a rapid event-related design?
Where negative activation is defined as:

Additional question: could this ‘just’ be a methodological artifact and if so, of what?

To illustrate what I mean, the lower line is below zero and the reviewer is asking for a neuro-cognitive interpretation. I am hesitant to overinterpret it and would like to root out methodological reasons. 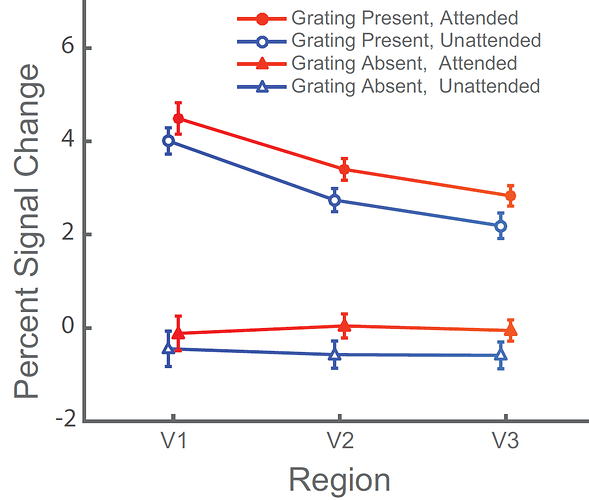 Thanks for the help!

hi,
My main impression is that the negative value is not significant anyway…
So I would not give convoluted explanations to the reviewer

If the effect were true, the most plausible explanation would be a timing issues/wrong hrf model (but with one condition only ?)

Of course you can also tell a complicated story about vascular effects (e.g. “competition” for blood flow that would reduce signal in non-activated areas), but this sounds like hand-waving, hence I would discourage giving such “explanations”.

Hi Bertrand,
Thanks for your response! Yeah, it was ‘significant enough’ to the reviewer to start asking questions and basically I’m hoping to show why it’s not such a big deal. I’ve been simulating data a bit and actually the point that you’re mentioning seems to be quite plausible. The ‘(but with one condition only ?)’ is slightly less surprising in the context of my experiment. The ‘attention’ and ‘stimulus’ condition are not necessarily exactly the same in timing, as we ask people to direct attention and show the stimulus with a slight delay. And as a result, we might be using the ‘wrong’ HRF model. And after playing around with simulation parameters, it’s indeed quite possible to get negative betas here and there of this order of magnitude.
Thank you for the help!
Tim