ROI mask based on atlas probabilities in FSL

Hi,
I want to extract a mask based on Juelich atlas, considering only voxels that have 50% of belonging to a specific region (amygdala nuclei).
I thought I should do it with the “fslmaths [FILENAME] -thr 50 [OUTPUT_NAME]”.
However, I it appears that this command uses some activation threshold that does not 100% overlap with the atlas probabilities.
For example, in the attached screenshot, the probability of being part of the lateralobasal amygdala is 56% and the threshold on the right is 43. Accordingly, the value in the mask is zero although it is supposed to be 1.

How can I extract a mask BASED ON THE ATLAS PROBABILITIES?

Thank you very much, 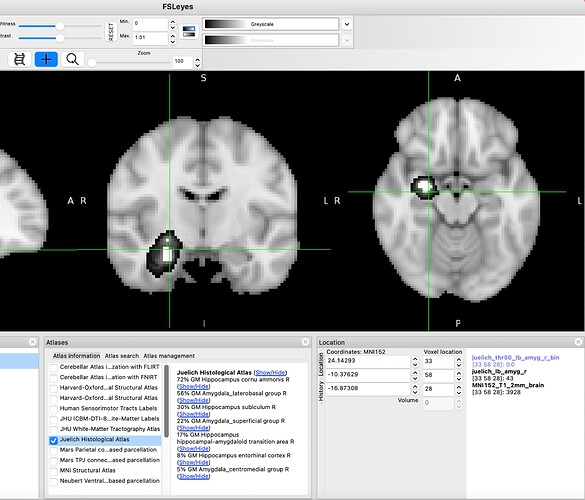 If your original atlas is probabilistic, wouldn’t you want to threshold it at 0.5 instead 50? I thought usually these masks are represented as probabilities from 0-to-1. It would help to know what kind of values are obtained in the atlas and how the atlas is organized. For example, is the atlas a single 3D image where each region is given a different intensity, or is a 4D image where each region has its own 3D image?

Hi Steven,
Thank you for the answer! The atlas I am using is the built-in Juelich atlas in FSL. I think 50 is the right threshold and it seems that the values I am getting in the atlas’s masks are between 0-100. I think I get a 3D image where each region is given an intensity within its region (e.g., when I look at the centromedial amygdala mask, I get a value between 0-100 that corresponds to the probability of being part specifically of the centromedial amygdala).

I would also note that in the meantime I got a response on ‘fsl archives’ that the probabilties shown in fsl rely on a 1mm standard image when I used the 2mm image to extract the probabilties, so it could be just a misleading presentation in fsleyes that does not affect the mask creation process itself. That is, I created the mask based on the correct 50% probability threshold, but in fsleyes I should see a bit of mismatches between the thresholds and the atlas probability values.