P.S. : Let me know if duplicate

thanks for starting this topic.

The Intro video doesn’t seem to introduce what linear systems are and the basic intuitions for the maths behind it (e.g. relationship between eigenvectors of the A mtx and dynamics, which is covered in 5s).

Does anyone know of a brief and effective intro to linear systems that the students could use to complement the intro video?

Just watched the intro vedio of W2D2. The moment I finished the vedio, I felt a great relief from chaos.
From my perspective, as a total beginner, I wish I could learn some basic information about linear system through a simple way. However, after the first several minutes, I was trapped in handwritten notions and complicated research without a good understanding of what we are talking about. I think W1D4 is good example.

Have a look at the micro lectures in the tutorials? I felt they moved at a nice pace, and give some intuition about e.g. the relationship to the eigenvectors. There’s also some references there for material you might want to watch in your own time

thanks, the videos in the tutorials are very helpful indeed.

I was hoping to find a primer to send my students to watch/read before the intro to help with understanding the intro itself.
I guess I can tell them to watch the first of the embedded videos.

The 3Blue1Brown videos are fantastic for algebra introductions (but they are quite abstract, so might be difficult for someone more application focussed to see the connection immediately)

This day actually incorporates several different topics (deterministic linear dynamical systems in continuous time and space, Markov processes, stochastic processes, auto-regressive models), each would have its own general introduction.
This course by the legendary Steven Strogatz is a great in-depth source for dynamics (despite its name, it starts with linear dynamics):
‘https://www.youtube.com/playlist?list=PLbN57C5Zdl6j_qJA-pARJnKsmROzPnO9V’

Lecture 1 is a nice overview, and lectures 2 and 5 cover deterministic linear dynamical systems in continuous time and space.

For something shorter and more concise, I guess the tutorial nano-talks would be a good resource…

Thanks, that looks really interesting.
I’ll definitively have a look (though it’s not a very concise primer for tomorrow

Since we’re suggesting YT playlists, this great lectures series from Steve Brunton (related to teacher of W2D2 ?). Though the videos are mostly on control theory he goes in depth into linear systems and explains the topic with great clarity.

Yep, Steve and I have many collaborations, including 2 children

His YouTube videos on dynamical systems are highly recommended, but I’m biased.

Perhaps the Intro video is not the most “Intro” material… The first Tutorial is trying to start from almost scratch and works through lots of the basics, although I do assume the students have been exposed to eigenvalues/eigendecompositions already (3blue1brown is strongly recommended).

The Intro video is very interesting, I’m just afraid it might not be accessible to students that haven’t seen linear systems before.

The tutorials videos and exercises are really great though, so I’m sure it won’t be a problem and by the end of the day they’ll have mastered linear systems.

Let me know how it goes!

Hey all, I think W2D2’s tutorials are very nice! I’m not too familiar with dynamics but I really enjoyed going through the notebook and the short videos. It was clear, at the right pace and spot on!

Just a quick note: in T4S1 the estimator of a in the OU process is unbiased. The reason you might see a systematic bias downwards might be due to using non-stationary data from the very beginning. If we instead estimate from data after, say, 100 time steps, and simulate for longer, the estimated a should converge to the true a pretty quickly!

I second that. Eric did such an amazing job summarising a whole field of comp. neuro. research in 30mins, zero time wasted at all. But this would be a nice intro to someone more senior…

So there is probably a casual short-hand…? At around 5:48, they Taylor expansion should be around \bar{x}, but he did say verbally that this x is around \bar{x}.

Oh yeah, I also watched these and thought they were great! I was planning to recommend them for the Optimal Control day… 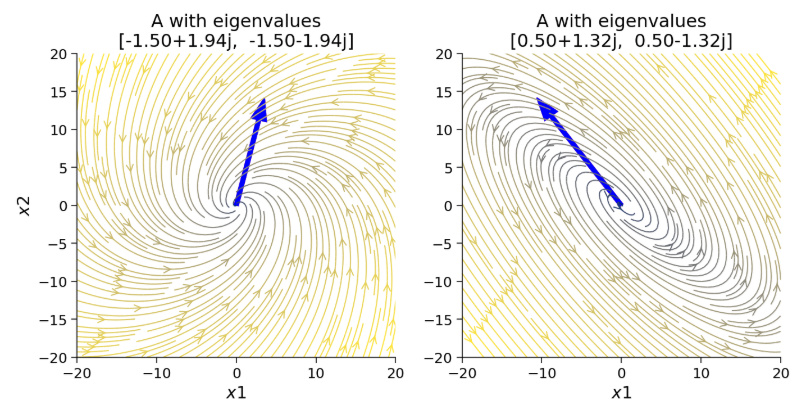 W2D2 tutorials are so beautifully done!
The only thing I could add as a bonus to tutorial 1 is a classification of equilibria that a linear system may have. Something like: 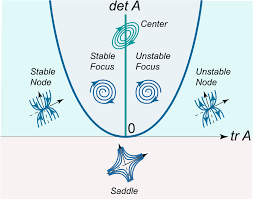 Sorry if I missed it somewhere.

That’d be a wonderful addition as a bonus, initially I didn’t want to overwhelm even further with even more linear algebra.

A+ on trying these A matrices!