Hi all, I submitted this already as part of my introduction post, but since I figured it probably didn’t get the right attention over there, I am now shamelessly reposting it here.

I just finished doing a fmriprep v20.2.1 multi-threading benchmark on our HPC cluster, which I figured may interest some of you (I hope). Here is what I found: 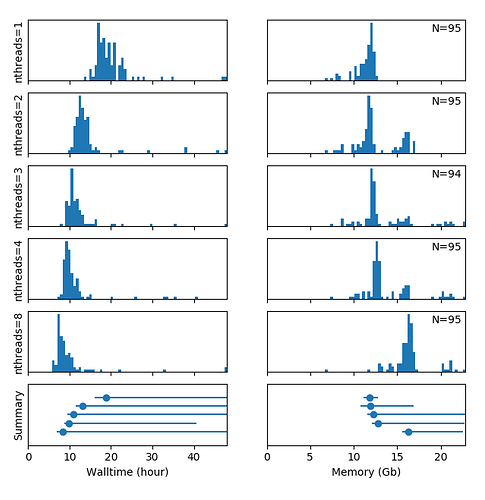 I would love to get some explanation and/or comments from you on the irregular / multi-modal memory usage of my multi-threaded jobs!

p.s.: If you are really interested in this topic, all the code to distribute the fmriprep batch job over an HPC cluster (fmriprep_sub.py), as well as the data (i.e. PBS logfiles) and code to generate the benchmark plot (hpc_resource_usage.py), can be downloaded from github.

Amdahls law. This demonstrates why it is often better to process multiple participants in parallel rather than using multiple cores for one participant.