Recently, I ran the newest version of the fMRIprep (22.0.0) on the data which was previously preprocessed with 20.2.6. With the older version, the output looked perfectly fine. However, with the newest version the fMRIprep after 5h the processing (compared to 1h with the older version) fails. The HTML output is created but there is a number of mistakes from the B0 field mapping onwards.

Is it possible it’s related to the command I’m using or to the version of the fMRIprep script?

Thank you for your help.

To clarify, are you using 22.0.0 or 22.0.2? What are the error messages? Can you share any relevant log outputs? I also wouldn’t use the no-recon-all argument, and would always explicitly state a work directory with the -w argument.

Interesting report. I have the feeling that I read already several reports showing worse results when using the latest versions of FMRIPREP (v21 and v22) compared to earlier version (v20).

But I must say that it is not what I observed with our datasets where we use pepolar SDC.

Did you acquire fieldmaps for your dataset? If yes, Why do you chose to use SyN?

In your case I can make 2 suggestions:

Let us know if you get better results! Thanks!

2 Likes
Fmriprep SDC distort the image and there is error for some subjects
Improving susceptibility distortion correction with 7T data
abudzinska November 18, 2022, 11:23am #5

Thank you very much for your answers and helpful comments!

To clarify I was using the version 22.0.2. We did not acquire fieldmaps. I did not post the errors I got because there were many of them and they were due to different reasons (I’m attaching the examples now).

We will most likely switch to the older v20 but maybe this thread will be useful for other members. 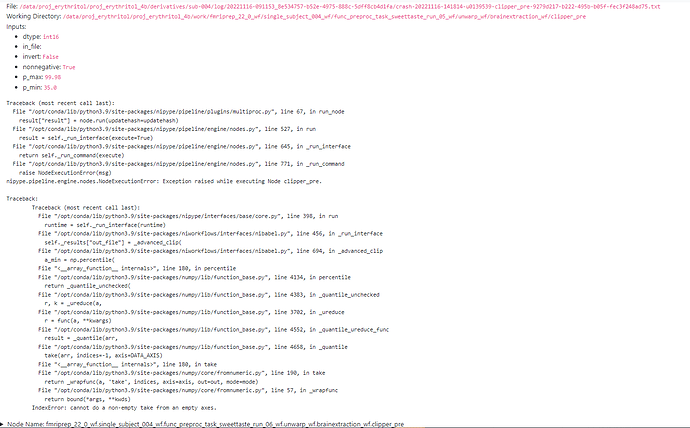 Does your dataset pass the BIDS validator? I don’t understand the origin of these errors.